Editor's Note: Scholar, Cinephile, Critic and Film-maker John Conomos wrote this lengthy study of Robert Aldrich some twenty years ago. It was never published. Recently John posted the text on his Facebook page. With John's permission I've reformatted it for the Film Alert 101 blog and added some pictures. It is a remarkable piece and one worthy of much wider circulation.

BEYOND BLACK AND WHITE: ROBERT ALDRICH’S BAROQUE EXISTENTIALISM
“If you’re going to spend 25 years as a filmmaker, as I have, you have to make films to please yourself. Whatever I’ve thought of them later, and whatever the critics and the public thought of them, the way I’ve made my movies has seemed right......... If you blow one, that can’t be the end; you pick up the pieces and go on. If you’re a filmmaker you cant disappear into a bottle of whiskey or anywhere else.
"But you’ve given a year or two of your life to a film. And if it fails, you have no idea how emotionally painful it can be. Still, win or lose, you put yourself back together and move on, because that’s all you want to do.” Robert Aldrich

“His films resembled him : lean, extrovert, punchy, framed in concrete and edited with
a trowel. Enough to wake up any sleeping buff.” Claude Chabrol
“The last drainings of the underground film show a tendency toward moving from the plain guttural approach of Steel Helmet to a Germanically splashed type of film. Of these newcomers, Robert Aldrich is certainly the most exciting - a lurid, psychiatric stormer who
gets an overflow of vitality and sheer love for movie-making into the film. This enthusiasm is the rarest item in a dried, decayed-lemon type of movie period. Aldrich makes viciously anti- something movies...... .” Manny Farber


Introduction: Inside and Outside of Hollywood Mainstream Cinema
Robert Aldrich is one of the enigmas of post-war American narrative cinema. He had two passions in his complex, generous and turbulent life: making films and film politics. Both were inextricably intertwined throughout his career inside and outside of Hollywood. No-one of his generation conveyed so enthusiastically as Aldrich did the sheer existential joy of shooting a film. Witness the numerous photographs of Aldrich discussing a shot with one of his actors. Aldrich’s explosive body is always being transported by the physicality of filmmaking: for example, Aldrich demonstrating to Lee Marvin how to kick John Cassavetes in The Dirty Dozen (1967) (left). In another telling photograph, Aldrich explains with the aid of one of his raised legs what he wants for a particular scene from Bette Davis in Whatever Happened to Baby Jane (1962) (below). 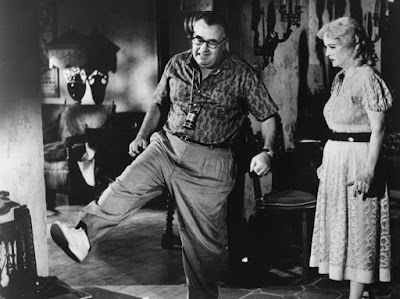