I hope my memory is not too far off the mark here... 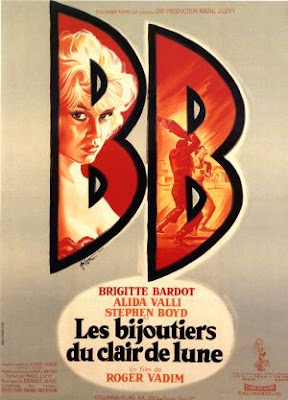 Back sometime in the 50s and early 60s, the first Brigitte Bardot films started arriving in Melbourne. A couple of them played those venerable art houses The Savoy and The Australia. But the big mama of them all was Et Dieu Crea La Femme/And God Created Woman (France, 1956. Directed by Roger Vadim it was made before the term Nouvelle Vague had been invented and Vadim wasn't regarded as part of that group. He had worked his way through the ranks as a scriptwriter and assistant director before playing his trump card, his wife, the fabulously proportioned BB. It took several years for the film to reach Australia and I recall some of the bolder kids at school sloped off to see it. In those days school kids could get into movie largely thanks to government policy which allowed censors like Richard Prowse, the famously nomenclatured "One Armed Dick", to cut the bejesus out of any film they liked without any explanation at all. It was more than a decade later before Don Chipp cleaned up the mess that the punishers and straighteners were inflicting on us. Et Dieu  played for quite some time at what was then the old State Theatre on the corner of Flinders and Russell Streets. Its now a nightclub downstairs and a home for MIFF upstairs.

Les Bijoutiers du Clair de Lune was Vadim's third feature. Between the two films was the almost unknown Sait-on Jamais/No Sun in Venice, screened once by MUFS back in 1963 and not seen by anybody since. Seems almost lost. It had only French and German actors, a mistake Vadim didn't make with his next film. The Irish actor Stephen Boyd got to star alongside Bardot and the chief supporting role was played by the internationally known Alida Valli. Though a French/Italian production it was filmed in the south of Spain. Vadim and two others wrote the script which was based on a 1954 novel by Albert Vidalie.

Perhaps I can let Wikipedia take over from failing memory to give the background.

Set in rural Spain, Ursula (Brigitte Bardot), is a young girl who has just left a convent and has moved in with her aunt Florentine and her violent husband, the count Ribera (José Nieto). Ribera wants to see Lambert (Stephen Boyd), a young man from the village, dead. Ursula quickly falls in love with Lambert. In a confrontation between the two, Lambert kills Ribera in self-defence.

.... and on it goes until (Spoiler Alert) it all ends tragically for BB but not before she and Boyd have had a short but for the day quite steamy scene in the cave where they are hiding out from the law.

But where the memory trace kicks in is in Vadim's photography of the backwoods Spanish landscape. The bare flat hills are perfect for Cinemascope and Vadim isn't frightened to do more than a bit of landscape mongering as he tells the tale of the lovers. Red and brown earth, cloudless skies, baking heat which causes BB to strip down to her underwear for more than a bit of the movie.

I dont think I've seen the southern Spanish landscape that we've just driven through, taking more than a few Ks on backroads that hardly saw another car, to better effect. For us, almost every town and village seemed to be asleep, no doubt its population staying indoors to escape some of the brutal heat of the day.

So, not Saura or Bunuel or Erice for Spanish landscape. Vadim beat them all and the memory trace of the night way way back in the 2000+ seat Brunswick Padua with an almost entirely male audience kicked in big time.

It should be said that the steamy scene in question mentioned above was in fact far less steamy in those days. One-armed Dick and his fellow censors took out any trace of nudity. It was only when the DVD was released that the full steamy moment was recovered and revealed.