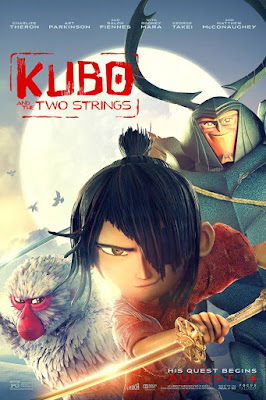 It’s about two weeks since I saw Kubo and the Two Strings, but it’s still very much with me. Animation is not a format that I usually get very involved with – and the trailers before Kubo  of some of the animations lined up for the next school holidays reminded me strongly why  that’s so.  But at this year’s MIFF My Life as a Courgette was one of my favourite films.
And now, Kubo.   It’s getting a rather strange release – out of school holidays, but only (in Melbourne at least) two day time sessions, though at quite a large number of cinemas. It did have a kid’s gala screening at MIFF.
I’m not even sure how I finished up going – but I’m almost ecstatic that I did.   Director Travis Knight, Wikipedia tells me, is a former rapper, a producer with stop-motion animation studio Laika and Kubo is his first film as director.  Although it’s an American work, the story is Japanese, with elements of their ghost tradition (think Ugetsu) and is about a boy – Kubo – who has rather difficult relationships with his family that he must resolve.  (And when you see it, you’ll realise how many spoilers I’ve dodged in that summary – just remember, I did say think Ugetsu.)
Where many US animations seem to think up an idea or situation that allows for a flow of isolated gags, this has a fully developed, evolving story. And it has magic!   There is magic in the story itself – Kubo is a wonder at creating origamis that come alive as he tells his stories to the villagers. And there are more supernatural elements in the story as well.
And there is magic in the look and the sound of the film.  This is a story with beauty – not cuteness, or satire – in the characters, and the settings. The smoothness of animation is now something that audiences expect. Here it seems a miracle that you are fully in this world.  With the end credits there are scenes from the production – don’t walk out before these. These amazed me – much more complex than I’d imagined.  And they don’t destroy your illusions, but add to your sense of wonder.


Actually, I’m not sure if it’s necessarily the film to take your young nephews, nieces or grandkids to as a justification for your own visit.  The appreciation of its story structure, characterisations, and creation may be aspects they’re not acknowledging yet – but then I may be underestimating how attuned kids are to something that really doesn’t condescend to them in any way.
Posted by Film Alert 101 at 15:10