“If Woman On The Run had been directed by Raoul Walsh or Joseph H. Lewis or Don Siegel, it would have been rediscovered decades ago and heralded as a minor masterpiece” – Eddie Muller, Film Noir Foundation. 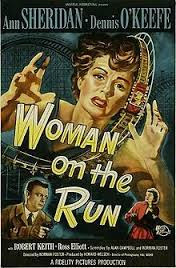 Muller had once seen an intolerably poor VHS copy of the film taped off television, but failed to find any surviving print. Then one day he was shown the distribution agreement between Fidelity Pictures, the producers of Woman On The Run and the distributors, Universal-International. It included a clause suggesting an archival print might be at Universal.

After a search of the studio, the 50-year-old print was discovered. It was pristine, the original laboratory seals still on the reels. After its first screening in 2003, the print made its way to various film festivals. Five years later, however, the print was destroyed in a fire on the Universal lot.
But prescience and illegality - qualities shared by both film preservationists and members of the Sea Shepherd - led Muller to secretly make a digi-beta copy of the pristine print in 2003. This pirated digital version was later used for a French DVD release in 2012. When the British Film Institute archives turned up a 35mm dupe negative and a damaged 35mm master soundtrack, the Film Noir Foundation together with the Hollywood Foreign Press Association and the UCLA Film and Television Archive set about producing this superb Blu-ray.

Directed and co-written by the prolific Norman Foster (Journey Into Fear, 1943) and set in San Francisco, Eleanor Johnson (Ann Sheridan) is asked by the cops to help find her husband (Ross Elliot) who has disappeared after witnessing an underworld murder. With the help of newspaper reporter Danny Leggett (Dennis O’Keefe), she is drawn into a typical noir milieu - bars, waterfront restaurants and Chinatown where little is as it first appears.

Foster and cinematographer Hal Mohr make superb use of the dark and often sinister late 1940s San Francisco locations. A rare noir with a female lead, Sheridan’s finely nuanced performance ranges from an acerbic estranged wife to a woman in grave danger and realizing she really is in love with a husband she barely knew.


The final sequence in an amusement park with a roller-coaster ride and spooky clown laughter is reminiscent of both Orson Welles and Alfred Hitchcock. And then there’s the cop left to walk the dog Rembrandt…one of the best canines in all noir.
Posted by Film Alert 101 at 20:25