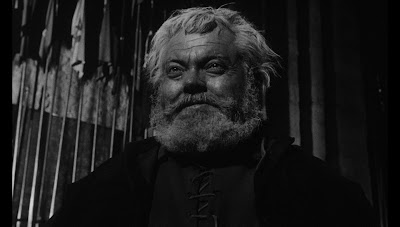 Two of the nation's senior cinephiles have quickly looked over the new Criterion edition of Orson Welles Chimes at Midnight  and their notes on this major new release are set out below. (Thanks to David for the photo and link to a Youtube extract.)


Noel Bjorndahl writes: I love Orson Welles for his largeness in all senses-the extravagance that cost him his career also left us a handful of energetic, bizarre, baroque theatrical masterpieces that display his acting and film making skills in excelsis and present his fascinating humanity warts and all. Several parts genius and some parts charlatan he was irrepressible and irresistible, Falstaff reincarnated in a range of unlikely 20th century guises (and finally Falstaff himself in his own film); a man of the theatre, he slipped effortlessly into film and with Citizen Kane brought a new intellectualism and realism to the essentially visceral and melodramatic American cinema. The movies would have been the poorer without Xanadu, Rosebud, depth of field and the first-if not the best-of Welles’ ruminations on the uses and abuses of power and power mongers (Citizen Kane). In the age of Rupert Murdoch’s global empire, the rise and influence of Hearst’s newspaper kingdom is if anything as relevant now as it was in 1941. Welles’ manipulation of narrative structure and viewpoint and control of image motif remains powerful to modern audiences and Kane would be a towering achievement from a mature artist at the height of their powers let alone a jumped-up upstart of a mere 25 years.
Welles was always presumptuous. He has since proved a man of many parts - actor, conjuror, raconteur, writer/director extraordinaire, master of cinematic and theatrical mise-en-scene and legerdemain. He might well have been a Renaissance artist in a previous life; as a conversationalist alone he is his own greatest creation - witness the volume of recorded interviews with people like Peter Bogdanovich where his sense of mischief is given full play and his teeming anecdotal/narrative gifts weave their enchanting spell. He was a mesmerising, charming, witty talk show guest and could have made a career out of television appearances had he submitted more to quick fixes for his financial problems. But Welles remained the maverick, globe-trotting and jet-setting to drum up patronage and cash to finish his long list of truncated projects and works in progress.
Welles had a deep affinity for that other brilliant theatre luminary William Shakespeare and although his film versions of Macbeth and Othello are marred by obvious production difficulties and budgetary limitations - the recurring leitmotifs of Welles’ blighted career trajectory-he finally came up with Chimes at Midnight, arguably the most successful attempt to bring the spirit of the Bard to celluloid. This beautiful elegy for Merrie England is several parts high spirits and several parts melancholy. A compendium of various Shakesperian texts, The Merry Wives of Windsor and both parts of Henry IV among them, along with Holinshed’s Chronicles, Welles’ Falstaff film gives him the part he was born to play (or at least literally grew into). Falstaff in this expressive incarnation becomes a swaggering human mountain full of the spirit of play, a kind of Loki writ large, egging young Prince Hal to sow his oats in grand style across his future kingdom knowing well that the brevity of a youthful prince’s spring will soon be overtaken by the long winter of a king’s destiny.

The tragedy for Falstaff is that while Prince Hal may share the “chimes at midnight” with the riff-raff, King Henry V may not. The King’s rejection of Falstaff as King inspires some of the most melancholy moments ever committed to film. Falstaff’s swift decline and demise is deeply impactful due to Welles’ rueful but humane and philosophical acceptance of the way things are. Welles’ idol John Ford in The Man Who Shot Liberty Valance roots for Tom Doniphon (John Wayne), all that’s symbolised in the cactus rose and “printing the legend” rather than the reality of the traditional West so often celebrated by that great Irish-American film/poet. Similarly, Welles’ heart and soul is with Merrie England and everything embodied in the friendship between Falstaff and Hal and the “times that they have seen”.
The tavern scenes are therefore full of very funny slapstick which Welles clearly relishes. Rarely has he let his hair down and his grand Elizabethan sense of humour to flow so naturally into the fabric of one of his films. The darker hints of mortality and the precariousness of patronage are always lurking in the background and the film is essentially another of Welles’ perceptive and penetrating studies of power, but never before have the surfaces of a Welles film been so enjoyable as in the sequences of carousing and highway robbery. Falstaff plays to the hilt his version of the Lord of Misrule, kettle on head holding forth to his “subjects” (cronies) in an unforgettable vignette.
The medieval battle scenes on the other hand bring together the light and dark poles of this extraordinary work; visual gags of Falstaff trying to mount a horse and running through the mayhem like a beheaded peacock are followed by a stylised combat sequence that captures all the barbaric atrocity and terrible beauty of pre-modern technological warfare.
The performances are dominated by the almost surreally outsize figure of Welles (even upstaging the landscape) but they are uniformly excellent. Keith Baxter brings to life Prince Hal’s uneasy combination of virility and reflectiveness; John Gielgud in a telling cameo shows us just how “uneasy lies the head that wears the crown”; Jeanne Moreau’s world-weary Doll Tearsheet carries conviction and poignancy and body language to match; surprisingly Margaret Rutherford’s Mistress Quickly almost steals the film in her “cold as any stone” set-piece. I’m so used to Rutherford as a slightly dotty old mammoth that the melancholy atmospherics conjured up in her speech and performance took me by surprise and left an enormous lump in my throat. I’m quite as blown away by what Welles has done with this impressive ensemble cast as I am with his predictably brilliant mise-en-scene.

The Renunciation scene from Welles' Chimes at Midnight (Spain 1966) finally released by Criterion in the superb new 4K restoration it desperately needed to rescue it from near oblivion. The speech is the climax of what has previously been perhaps the most vivacious, life affirming and joyous movie ever made with such profound melancholy at its core.
Many have waited a long time for this, although the keen amongst us have so far been afforded several earlier, but less than ideal releases to keep the dream alive. A blurry and horrible looking Spanish DVD from Divisa, then a very good Studio Canal PAL DVD from a fine 35mm source which didn't stay in circulation long, and which was anyway cropped too tightly to a 1.85 aspect ratio, constantly wrecking the headroom in Welles' low angle shots and compositions. And a visually hideous "restoration" last year from the woeful Mr Bongo label on Blu Ray from an alleged restoration by an outfit called Cineteca Espanola which was so lacking in blacks and contrast in this greatest chiaroscuro in all of movies, it looked like it had been soaked in bleach.
True justice has now been done to Welles, as well as to Shakespeare. Surely the greatest Shakespearian adaptation, and as my friend Noel Bjorndahl would make the claim, the greatest Welles.
In a thin year from Criterion to me anyway, one of the standouts.

I know thee not, old man