At the bottom of a previous post from Michael Loebenstein, head of the National Film & Sound Archive, in which he listed the NFSA's recent activity in restoring Australian films, I wondered whether it might be a good time to start an annual event, managed by the NFSA, to show off this stuff. It seemed to me that at present actually screening what the NFSA has done was very hit and miss with the major festivals being almost the exclusive outlet. Those events get very picky about having premieres these days and are just as likely to pass if they think they are merely second or beyond in the queue. Madness but there you are. Sydney especially nowadays will never screen anything that went on at Melbourne because that was nine months ago and the film is thus 'old'. As I said, madness but there you are. The list of films (not just local product but that's another story) never screened in Sydney gets ever longer and no amount of puff from Gary Maddox will ever get Sydney venues up to this mark. 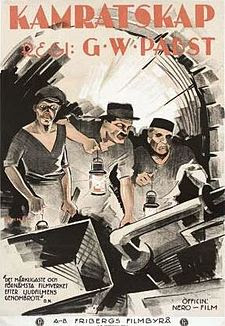 Meanwhile, inevitably, from one of the deep crevices of cinephilia, a note comes through about an event that seems like a perfect model for an event of the kind I was talking about, a festival of German restorations held over the course of an extended weekend in Berlin  under the auspices of the Deuthsches Kinamatek. Here is the link with all the info, in German and English. The films themselves will be screened with English subtitles. Among the German classics on show, tied together with lectures on preservation and other matters, are Kameradschaft (G W Pabst, 1931), Rose Bernd (Wolfgang Staudte, 1957), Germany Pale Mother (Helma Sanders-Brahms, 1980) and  Du Haut en Bas (GW Pabst, 1933). There are a number more lesser known titles (to us) to round out the program.