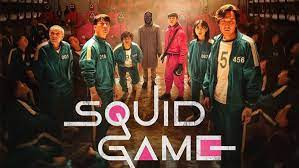 No spoilers here, just background information on the outrageously popular Netflix series - likely to become the most watched TV series ever.

All of the following comes from articles in The Guardian UK, by Edward Helmore, Nemo Kim (Seoul), Justin McCurry (Japan), Zoe Williams and Mark Sweney.

In the first three weeks after it “dropped” on 17 September, Squid Game has become Netflix’s most popular show in more than 90 countries with 95% of those watching living outside South Korea. Viewing audience so far is 111 million. Not bad considering it’s sub-titled and a sizable slab of its audience is kids. 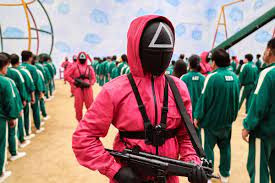 In the UK, Squid Game simulations have emerged where losers will be chased and shot with BB guns. The series is being streamed on 60 illegal Chinese websites. A broadband provider in the UK has launched legal action to make Netflix pay for the huge surge in traffic. Children are rewatching the series immediately after finishing the last episode. 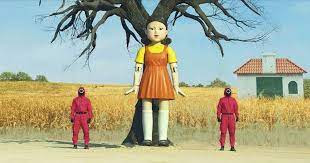 The wealth inequality in South Korea, central to Squid Game’s narrative – and recently seen in Bong Joon-ho’s Parasite– reflects the failure of capitalism in a country where household debt is more than 100% of GDP. Youth unemployment is rising, as are property prices, and financial loans are ridiculously easy to get.

“The total amount of debt run up by ordinary South Koreans exceeds GDP by 5%. In individual terms, it means that even if you saved every single penny you earned for an entire year, you would still be unable to repay your debt. And the number of people with debt problems is rising at an exponential rate”.

One Guardian story tells of a 35-year-old part-time food delivery rider who lives in a hostel room “slightly bigger than a coffin” and only dares to leave it after midnight: “I feel other people sense that I’m a failure, so I only come out at night to smoke and watch the stray cats”.

Just two years ago, he was working as an IT engineer but got sick after late nights and excessive overtime. He and his wife decided to open a pub instead. But Covid hit and his pub customers dried up to nothing. After failing to pay their rent for four months they secured a bank loan (“surprisingly easy”) at a steep 4%. This was followed by bank loans from all five of South Korea’s major banks, using their home as collateral. Then, they borrowed more to pay off loans from commercial lenders at more than 17% interest rate.

“It took over our lives. My wife even said she heard me muttering about interest rates in my sleep”.

His wife has now found a restaurant job in the country and his parents look after their two small children.

He’s heard a lot about Squid Game: “You have to pay to watch it and I don’t know anyone who will let me use their Netflix account. In any case, why would I want to watch a bunch of people with huge debts. I can just look in the mirror”.

Little wonder then, after reaching the half-way mark of Squid Game, you begin doubting there will be anyone left alive to resolve the final episode.