Streaming on Prime Video and on YouTube - John Baxter contemplates the end of the world in ON THE BEACH (Stanley Kramer, USA, 1959) and veers to FROM THE TROPICS TO THE SNOW (Richard Mason & Jack Lee, Australia, 1964)

Movies that influence public opinion aren’t particularly rare but the number that persuade people to relocate on the far side of the world must be vanishingly small.  As for the chances of such a film being made in Australia, one would get better odds on Donald Trump winning the Nobel Peace Prize.

All of which makes On the Beach that much more exceptional.

Memories were still fresh of Stanley Kramer’s 1959 film when, in October 1962, the US Navy began boarding Soviet ships bound for Cuba. Having been convinced by Kramer that fallout from a nuclear war would reach Australia last, some nervous Americans, many still in pyjamas, boarded the first flights headed Down Under.

As an emigrant himself, London-born Nevil Shute knew the trauma of settling in a new environment, particularly one as remote as Australia. Journalist Neil Jillett confessed to inventing the gibe, attributed to Ava Gardner, that a story about the end of the world could have no more appropriate location than Melbourne,  but many echoed the sentiment. One fugitive from the missile crisis observed that, in the cold light of day, his new home resembled  “the place where, if you were giving the world an enema, you would plug it in.”

The filming of On the Beach  engendered a similar negativity in the local film community. Its members deprecated an imported cast and crew that included production designer Rudy Sternad, cinematographer Giuseppe Rotunno and actors Gregory Peck, Ava Gardner, Fred Astaire and Tony Perkins. Among a handful of Australians, former Cinesound set designer Eric Thompson created the interiors of Peck’s submarine, while local actors featured in a scatter of cameos. John Tate and Lola Brooks played a gruff admiral and his secretly adoring aide. John Meillon adopted an insecure American accent as a sailor who choses to die in a deserted San Francisco rather than an alien Australia, but his performance was curtailed to fatten Fred Astaire’s first non-dancing role as a scientist racked by bomb-maker’s guilt.  Watching Astaire expend 27 takes on trying to sound Australian convinced an extra that he could do better, and launched Bill Hunter on his  distinguished screen career.

Despite simultaneous premieres in twenty cities, including Moscow (where it screened in the suitably dour venue of a workers’ club), On the Beach flopped, but not before inspiring a brief vogue for films on the dangers of nuclear war. Without it, we might not have had Doctor Strangelove orFail Safe, let alone such lesser films as The World, the Flesh and the Devil. With the possible exception of Strangelove,however, none of these significantlyinfluenced public opinion, and the one film that threatened to do so Peter Watkins’ unsparing The War Game for British television, was suppressed.

And what of Australia’s contribution to this weighty debate?

Among the incongruities of Kramer’s film was his decision to soften Shute’s chilly parable with a touch of the travelogue. A significant portion of the action takes place during seaside picnics or rural house parties.  Peck and Gardner embrace to swooningly romantic variations on Waltzing Matilda. while, in town, clubmen complacently play snooker and complain of having insufficient time to empty the cellar of its vintage port. 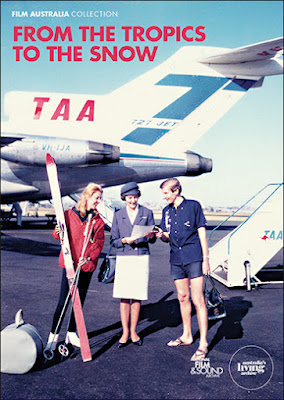 As usual, Canberra missed the boat. A more savvy tourist authority would have hired the contemporary equivalent of Paul Hogan – Graham Kennedy or Bobby Limb – to front a campaign assuring Americans that here was the world’s most accommodating bolt-hole. Instead, it cautiously commissioned From the Tropics to the Snow,  a sunny docudrama which, in effect, dramatised the inability of its sponsors to make up their mind. A screenwriter  (Reg Livermore, in his film debut) and a director (Aleister Smart) wrangle over rival approaches to a film meant to reassure any potential tourists scared off by Kramer.  Livermore proposes art and poetry, Smart favours sun, snow and shopping, while Alexander Archdale, channelling the Commonwealth Film Unit then boss Stanley Hawes, dithers, demanding both.

Political relevance is not on the menu. The film has a beach – a number, in fact – but their  greatest menace is sunburn. Only John Morris, one of the film’s eventual writers, exhibits anything like resolve. In an affirmation of key Aussie values, he is seen twice transiting the studios’ central corridor, each time bearing a cup of tea.

On the Beach  is streaming on Prime Video.