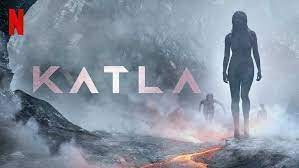 The creators of Trapped are back with a new series. In their earlier Icelandic drama (two seasons, 2015-2019), viewers had to peer through snow storms at a rather large local cop taking us through a frozen police procedural.

This time it’s the apocalyptic southern Icelandic landscape around the tiny town of Wik, a desolate habitat sandwiched between a raging ocean and Katla, a sub-glacial volcano regarded as Iceland’s most dangerous. In this series, it’s been erupting for over a year.

Almost everyone has left town for off-shore islands or to Reykjavik, leaving a skeletal crew of rescue cops, vulcanologists, a hotel owner, a medical clinic and a few diehard farmers and tradies.

Then there are the “changelings” - doppelganger versions of the dead and the living who arrive covered in soot from the volcano to either terrify or bring joy to human counterparts. Suddenly, it’s all a frozen Solaris. Characters having to face up to people from their past who are suddenly back and a permanent part of their lives.

One of them is Darri (Björn Thors) and he even locks his formerly dead son - now back from the underworld - in a room with the same catastrophic consequences as Kelvin (Donatas Banionis) in Tarkovsky’s sci-fi masterpiece.

Even the ooze and blacked ash in the volcano from where the changelings emerge is Katla’s equivalent of Solaris’s sentient ocean. But there’s no credit or thank you to Tarkovsky or the author of the novel, Stanislaw Lem. Much like Carlos Reygadas plundered Dreyer’s Ordet in 2007 for his art-house hit Silent Light. No credit there either.

Iceland may basically be all volcanos. There are 130 with 30 currently active. In March of his year, the Fagradalsfjall volcano that lies on a stretch of land between the capital Reykjavik and the international airport started erupting and is currently “ongoing”.

The eruption was preceded by “a swarm of earthquakes”; 40,000 tremors; four new craters; and several eruption fissures. In true Katla style, the currently erupting Fagradalsfjall volcano is thought to be the ancient burial site of an early Norse settler.

You can watch a trailer If you click here