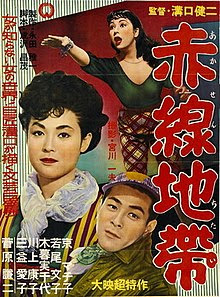 A compassionate account of women labouring for the men who rely on them or cast out for their work as prostitutes by the men just as likely to visit them. This film seems to lack distinction though.

Mizoguchi offers a more conventional polished 50’s studio-style work with an obvious exploration of injustice and hypocrisy. The characters’ motivations and psychology are at the centre of every scene, but because of the directness of this focus, the film loses the characteristic breathiness of his earlier work that lent his narratives a feeling of diegetic reticence and poignant realism (the peak of this, in my opinion, being his 1939 masterpiece The Story of the Last Chrysanthemums). 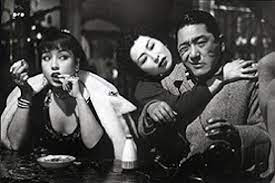 Something that I think Mizoguchi should really be commended for here is his audacity to portray or suggest the sleaze of the sex involved in prostitution. This element of the reality of a prostitute’s life is almost always (I haven’t seen any examples) left out of this era of Japanese films that depict the hardships of prostitutes -- shame about paid sex usually brought up instead in dialogue in terms of the spiritual and social tragedy in becoming a biddable woman, in losing the virtue of chastity or the appearance of it. But to see Yasumi slide the bedroom door shut with her foot as she energetically takes her client to the mattress, or Miki’s nude back as she steps out of the spa and her client admires her, draws us directly to the original scandal that unjustly affects/influences every character in this film. 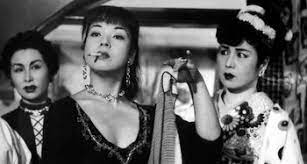 These moments are highly stylised (suggestive jazz music even plays in the scene with Miki), but they nonetheless get closer to a material, physical reality of the women at 'Dreamland', outside of the societal projections of stigma. In these moments, Mizoguchi still manages to stun us in an otherwise (at this late stage in Mizoguchi's career and early 'Golden Age' Japanese cinema) morally predictable take on the virtuous and thankless sacrifices of the early 20th century Japanese sex worker, and the cunning required of poverty-stricken women to escape employment in a brothel.
Posted by Film Alert 101 at 06:01