Editor's Note: This memoir by Sydney's supercinephile Barrie Pattison follows on from an earlier post I wrote about my late in life discovery of the great actor Ivan Mozjoukine. You can find the earlier piece if you click here

I remember David Meeker from the days when we both tormented John Gillett with comparisons between the London National Film Theater and the Paris Cinémathèque which managed to get through more than twice as much programming without uniformed usherettes and elaborate booklets printed in advance. 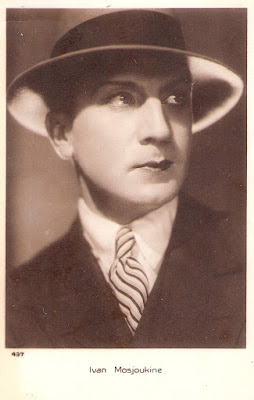 Ivan Mosjoukine came into my life earlier than that though, when one of those French Cutural initiatives had Langlois' Cinémathèque ship a couple of boxes of 16mm. prints to Australia without bothering with labeling the reels. Memorable in all that confusion was the 1926 Marcel L'Herbier Feu Mathias Pascal with my first striking glimpse of Ivan Mosjoukine/Mozjoukine/Mozzhukhin whose work continued to cross my path from irregular souces - 9.5 cut downs and isolated screenings like Le Brasier ardent jammed into an avant-garde season. Then there was Jean Epstein's less than sensational 1927 Lion of the Mongols/ Geheimnisse des Orients recently coming down the Culture spillway for the MFF.

In Europe I began to notice that, despite the inaccessibility of his films, Mozjoukine's work was discussed by the generation of film freaks ahead of mine. Of course the hold-out was Langlois, like many of his contemporaries, mesmerized by Mozjoukine and putting the last surviving prints at risk running through his projectors for the few takers who were bored with Battleship Potemkin and The Cabinet of Dr. Caligari (or Antonioni and Ingmar Bergman). Even Langlois couldn't get his reverential hands on the Tsarist era Mozjoukine films though.

That dam didn't immediately break but cracks appeared. After Glasnost the Russian archives worked up the courage to admit that they still had Protazanov's 1916 Pikovaya dama /Queen of Spades probably the most notable pre-revolutionary Russian film with one of the most extraordinary moments in silent film - most striking of the clashes of the parallel worlds that you find in those works. The academics inexplicably were more interested in Yvgenyi Bauer who directed some of the early Mozjoukines.

About then I made it to Pordenone for the first time and one of the hits of a hit loaded schedule was the Alexander Volkov/Mozjoukine 1930 Der Weisse Teufel/The White Devil a German French co-production with the cast mouthing their lines in Russian, the star's last real success and his final silent movie (captions and a synchronous score). The attendees were muttering "Who is that guy?"

The organisers pointed out that though his output and possibly his reputation once put him in a bracket with Rudolph Valentino or Emil Jannings, there had never been a retrospective of Mozjoukine's work, so next year...

On my own thin dime or not I had to be there and it was one of the great  movie experiences of my life no mistake. More than twenty films from early two reelers through the major features, this still wasn't complete and not all the films were great (Kean is a long three hours) but the hits kept coming and in big screen and (then) 35mm. copies. Volkov'sCasanova, which I used to think was plodding, registered in all it's swashbuckling, hand tinted glory. A collection of the believed lost Russian films aired.

Since then Pordenone managed to dig up prints of the splendid Mozjoukine feature length Maison de la Mystere which actually plays better that the complete serial, the 1928 Le Rouge et le noir/ Der geheimer Kurier and Vlad Strizhevsky's 1929 The Tsar's Adjutant /Der Adjudant des zaren both highlights of their events and it's become a tradition to run at least one Mozjoukine each year.

Impossible to ram all the extraordinary Mozjoukine stories in here - his playing a hairy devil or in drag, nearly being shot by the Bolsheviks, fleeing the country, appearing with Brigitte Helm and Lil Dagover (twice), Kiki de Montmartre, the Hollywood nose, the Romain Gary connection, the actor's ridiculous death. 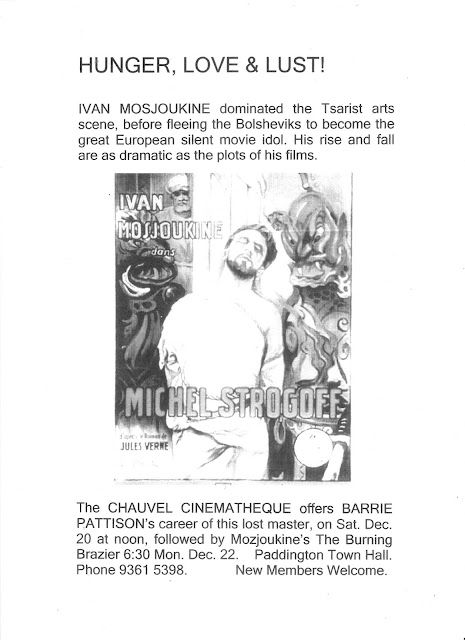 I did a short season (leaflet above) on Mozjoukine at the Chauvel ("Hunger, Love & Lust" - Kuleshov effect - get it?) and at the Tap Gallery with my translation of the inter-titles. I had Adrian Clement play live, with the Canberra 16mm. rolling through my Siemens at the right speed with added tinting. I proposed taking it on the road with the film societies but not surprisingly nothing came of that.


So when I had to find an email address in a hurry and all the first choices were taken (I didn't fancy being helzapopin 27) what more suitable? I get the impressing that the world divides into the people who say "Ah!" and the people who say "Who."
Posted by Film Alert 101 at 14:41