On Blu-ray - David Hare is excited by a new edition of NASHVILLE (Robert Altman, USA, 1975)


The two screens above and below are from a gorgeous new Paramount rescan and remaster of Altman's wonderful Nashville (1975). Click on the images for a better view. 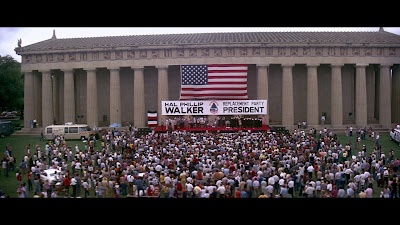 Criterion released Nashville under license on a Blu-ray back in 2013 and, apart from greater sharpness and color density, it looked like it was taken from a much older HD master Paramount used even further back in 2003 for its then DVD release.

That period of Paramount video releases from the 90s up to just a few years ago ca. 2015 is littered with a large number of relatively weak transfers to disc whether native or licensed to other labels. Perhaps the other most outstanding title, Chinatown, which was originally released on Blu-ray in 2012, looks better than the old Nashville ever did but it was obviously a better scan from the O-Neg and other prime elements which delivered a superior image. A gorgeous new 4K scan happened a couple of years ago but alas Paramount has only made that available as a streaming option through Amazon and region locked. Perhaps Polanski's tarnished reputation in the States from the puritan left inhibits the majors from ever really doing his movies re-issues justice.
In any case a new scan and master from the negs of Nashville finally realizes the full visual impact of the original Panavision anamorphic 35mm image with a ton of shadow detail and color range that is simply crushed to black in the DVD and the master supplied to Criterion back in 2013.
The new Paramount image is one of those now often realized miracles these days where a film stock with so much detail and nuance gets the best scanning and mastering available for the 1080p medium, as it has at Paramount under VP Archive Andrea Kalas, almost eliminating the need for a UHD 4K from the same new master.
As for the movie what more can I say? Watching it again with the semi-random but highly focused staging of the musical performance numbers, the show reminds me as never before of Altman's great swansong, essentially his self realized wake in the form of his final masterpiece, A Prairie Home Companion. Perhaps Nashville, if not quite a wake for American democracy with the end of the Vietnam War, anticipates it. History teaches us everything endlessly repeats itself, after all.
Meanwhile A Prairie Home Companion is another Altman that hasn't been given justice by home video to this day.
Posted by Film Alert 101 at 06:25