At the age of 62 and after 40 years in the filmmaking business, including a dozen features, Iranian writer-director Majid Majidi (b. 1959) can aptly be described as an industry veteran. However, that means something different in Iran from what it might mean in Europe, the UK, the US, and beyond. Or even elsewhere in the Middle East.

Working with minimal budgets (by international standards), languishing under a complicated and rigid system of censorship (requiring approval at various stages of the production process) and suffering from an impoverished exhibition infrastructure (a legacy of the burning of hundreds of cinemas during the revolution), these filmmakers have still managed to establish a widely admired national cinema which has also proved to be remarkably resilient.

Western audiences, raised in environments ruled by the new technologies, could rightly regard the Iranians’ work as a poignant reminder of a lost paradise. And one doesn’t have to be too sceptical to observe that there is, at times, a certain formulaic calculation in their fable-like stories about Nature and children.

Frequently in their films, events are filtered through the eyes of a little boy or girl, a story-telling strategy which immediately, and classically, opposes innocence to a world of brutal experience. Who wouldn’t empathise with lost and homeless children fending for themselves in unforgiving surroundings? Who wouldn’t discover, in their struggle and their ability to adapt to oppressive circumstances, a metaphor for humankind’s experience of the world?

Majidi’s latest film – like several of his earlier ones, such as The Colour of Paradise (1999) and Children of Heaven (1997) – perfectly fits that mould. (Ali and Zahra, the latter’s central characters, in fact, share the names of the protagonist and a supporting character here.) A tale of the Tehran streets, it declares its sympathies in an opening scroll: “This film is dedicated to 152 million children forced into child labour and all those who fight for their rights. In the name of God.”

Freckle-faced Ali (Roohollah Zamani, whose performance led to him winning the Best Young Actor award at Venice in 2020) is the 12 year-old leader of a ragtag group of children who roam the city in search of opportunities. He’s a fast talker and a bit of a charmer who knows his way around, and he’s certainly no fool. But he’s just a kid in a world ruled by adults.

When he crosses Hashem (Ali Nasirian), the local Mr. Big, he finds himself embarking on a mission by way of reparation. He and his team – they call themselves “the warehouse boys” – head off in search of a treasure that’s rumoured to be under in a cemetery next door to the local Sun School, an institute that’s committed to the needs of deprived children. To gain access, they first have to enrol in the school, then sneak into the basement and dig a tunnel from there to the cemetery.

The plot might remind one of The Goonies (1985), or perhaps even of The Treasure of the Sierra Madre (1948). And Ali is, I suppose, a bit like a kid version of George Clooney’s character in the Ocean's films (2001, 2004 & 2007). But this is about as far from a Hollywood heist movie as you’re likely to get. Majidi’s chief interest lies in the way the adult world manipulates his main characters to achieve their ends.

Mr. Big understands how to keep them loyal to him. He’s a pigeon breeder and, as he explains to Ali, he knows how to ensure that his flock doesn’t simply fly away. “Feed them well so that they come back,” he tells the boy, who’s wondering whether or not he should trust his new boss. Reassured and fuelled by excitement at the promise of a treasure at the end of the rainbow, Ali sets out to do his bidding. 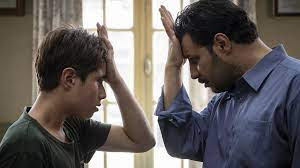 The stressed principal of the school (Ali Ghabeshi) is well-intentioned, but a greedy landlord is hovering, the school is short of ready cash and the threat of eviction is looming. So as a last resort, after they’ve all been locked out of the premises, he urges his students to climb the fences and occupy the grounds and then calls on their assistance for the fund-raising activities to enable to school to meet its debts.

It’s subsequently revealed that it’s not just the school’s interests that he’s serving here. He’s also planning on running for a place on the city council. The school’s idealistic vice-principal (Javad Ezati), who appears to be the only one selflessly committed to the needs of his students, voices his objections. One commentator has likened him to Robin Williams’ character in Dead Poets Society (1989). But the stand he takes on behalf of his charges seems doomed to defeat.

Meanwhile, Ali, who is gradually coming to understand that the world is more complex than he’d first appreciated, still has his eyes on the prize. Unfortunately, the school janitor (Safar Mohammadi) turns out to be one of many obstacles the boys face when he gets wind of what’s going on in the basement. Fearful of their plan being exposed, Ali offers him a share of the treasure to win his silence. But the janitor has his own agenda.

Iran’s official contender at this year’s Oscars in the Best International Feature category, Sun Children is a heist movie with a difference. Majidi’s characters here represent the powerless people of the world, those who, through no fault of their own, find themselves dispossessed, struggling to make sense of the machinations of those who wield social power. As its opening statement indicates, the film’s interest is in the exploited of the earth and in making us understand the ways in which their oppressors take advantage of them. Sometimes even the well-meaning ones.

Streaming on the MIFF Play site till August 22.