Editor’s Note: Once again Adrian Martin kicks off the anual Film Alert 101 roundup of good things that happened in 2018, things to cheer up the hearts and minds of the world wide cinephile community. Once again contributions are invited from anyone who feels like sitting down and setting out just what were the things that kept the faith.

Adrian Martin is a longtime critic, cinephile, scholar and enthusiast. He writes and comments and produces startling video essays from his current abode near Barcelona in Spain. His latest book is Mysteries of Cinema  and you can read more of his work and thoughts  if you go to his website  Film Critic: Adrian Martin You can support Adrian’s work as an independent scholar, for $1 a month or more, so much more, at Patreon.

Comments are welcome and any received will be published but will have to be sent to filmalert101@gmail.com  I am sorry it has come to this but I closed off the comments section because I got sick of removing the trash put there by bootleggers, viagra salesman and sleaze merchants.

More contributions will be posted as they are received.

1. The experts will be arguing for eternity about whether The Other Side of the Wind can really be considered an Orson Welles film – or something more like a hypothesis or proposal of what Welles intended, somewhere in his head at a certain point in time, the film to be. Sure, material has been subsequently shot by the restoration team, and a new narration attributed to Peter Bogdanovich’s character has been added; some shots have been sourced from other movies (I’ve actually seen Drive-In aka Carhops, 1975, on VHS!), and other fragments (like the Hopper/Mazursky/Jaglom bits) have been shifted from their original spot in the overall schema. Plus – more intriguing to me – we’ll never know how Welles would have chosen to balance, equalise or completely confuse and disrupt the relation between the frame story (Jake Hannaford’s party) and the embedded art-film (which I believe – far from being some parodic joke – is the absolute best stuff there, on par with his masterpiece F for Fake). But finally, who cares about all this nit-picking? The film’s alive, it exists, and we are alive to see and hear it. Whatever it is, it was worth the wait.

2. Things have really been happening in the very-low-budget realm of innovative filmmaking in Australia. I have had a chance to see, recommend and write about films by Allison Chhorn, Matthew Victor Pastor, and others – proclaimed and programmed by Bill Mousoulis in tandem with his exciting Pure Shit: Australian Cinema website project. But nothing could match the very special experience of sitting inside Melbourne’s Artist Film Workshop on a rainy night in November to watch four wonderful films by Anna Kannava (1959-2011) (Bill Mousoulis website linked previous and on my own website.) The evening brought back a home-truth to me: no matter how much we talk about World Cinema and Global Cinephilia these days, there will, alas, always be many great filmmakers – especially those in perennially disrespected formats like short, experimental and documentary cinema – who never get a foothold in the international circuit of film festivals, art events, retrospective articles, curated streaming sites, and the like. The Struggle Continues, Comrades! 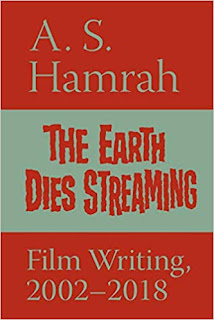 3. A book, just out: A.S. Hamrah’s The Earth Dies Streaming: Film Writing 2002-2018(n + 1 books, New York, available on Amazon). Emerging (as far as I can figure) in the late 1980s in the cool scene around Hermenautmagazine alongside other fine critical writers like Chris Fujiwara, Hamrah has slowly but steadily carved his unique voice, temperament and approach. Somewhat in the tradition of Manny Farber (to whom he pays eloquent tribute), Hamrah does not project the persona (very typical today) of a globe-trotting, festival-hungry, Blu-ray-collecting or torrent-loading cinephile – in fact, many accoutrements of the digital age seem to bring out a rash in him (hence the book’s title). Much of the book is devoted to capsule reviews of commercial releases – nobody explores the explosive art of the capsule like Hamrah – which are threaded together to form great frescos of roiling discontent: discontent with the state of the cinema, the state of America, the state of things generally. A must-read.

4. Recently seeing – and being overwhelmed by – the digitally restored/enhanced version of Wim Wenders’ Wings of Desire(1987) on the big screen of ACMI in Melbourne convinced me that it is not only the “crucial crossroads” (as I once referred to it) in Wenders’ career, but also something of a miracle in its material coherence and cohesiveness, on the levels of both image and sound design – and that even its most sentimental and wilfully “childlike” gestures and moments fully work and integrate themselves as Wenders intended them to. I used to find the film, ahem, ideologically “problematic”, but now I know that the only problem was in me. I’m over that hump now; I just love Wings of Desire.

5. Often, when watching “auteur TV” – by which I mean, not the new class of TV showrunners, but established film directors who try their hand at long-form, serial narrative – I get the niggling sense that these makers are stretching themselves thin, working too fast on too many parts of a whole, losing their fine-grain grasp on specific shots and scenes. The grand, outré exceptions (Pialat, Fassbinder, Ruiz) tend to prove the rule. But now there’s The Little Drummer Girl in 6 episodes, and it manages to be both “good TV” and remarkably detailed work across the entire board by Park Chan-wook. Some split-seconds of this I’ll never forget: the smash-cut from extreme long shot to extreme close-up during a violent scene; a cheeky answer to the perennial filmmaking craft question ‘how do you stage and shoot one person standing up while their interlocutor stays seated?’ (try it sometime: it’s a surprisingly difficult and complex mise en scènemanoeuvre). And there’s even some trademark Park work with the digital merging, morphing and rotating of physical and mental realms. More TV like this, please. 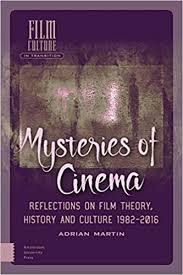