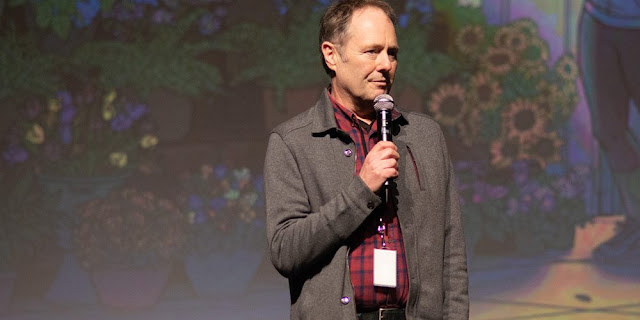 Editor's Note: This message about my friend Bill Gosden has gone round the world. Bill transformed the festival into an international powerhouse and devoted thirty years of his life to promoting the best in New Zealand and international cinema. His shoes will be hard to fill. More anon but here is Bill's official announcement.

I'm chiming into the December frenzy to announce my retirement as director of the New Zealand International Film Festival effective from the end of March 2019. After 18 months of sticking with my work through surgeries and treatment, I’ve been brought to this reluctant decision by continuing illness and the need for continuing treatment.
The patient support and understanding of NZIFF Trustees and staff have sustained me through the last year, while celebrating NZIFF’s 50th year in Auckland provided me with a welcome focus. Best-ever attendances for our programme there (and across the country) see me leaving on a high note. Such a success reflects the cohesive strength of key staff whose service to NZIFF is measured not in years but decades: Communications Manager Rebecca McMillan (one decade), Accounts Manager Alan Collins (one +), Programme Manager Michael McDonnell (almost two), Programmer Sandra Reid and General Manager Sharon Byrne (both two +). Whoever steps up to lead the programme can look forward to working with five sterling individuals who love their work and know NZIFF backwards. The Board too is anchored in long service, not least in trustee Andrew Langridge and chair Catherine Fitzgerald whose presence stretches back to the 1980s.
As for me, March 2019 will make the 40th anniversary of my beginning my original role with the New Zealand Federation of Film Societies – whence I was loaned out for three months every year to administer the Wellington Film Festival. In a constantly shifting mediascape there have been few dull stretches since. Regular iterations of the impending demise of cinema always denied us the luxury of reclining into ‘business as usual’.
Though a few hardy individualists tough it out alone, filmmaking itself is generally a collaborative project. So, for sure, is making a film festival. Marshalling the myriad interests at play may require concentration, discernment and even a little imagination, but the will to keep NZIFF thriving is widely shared. I am reminded again and again of the diversity of supporters who have seen us through the red and the black, the thick and thin.
I had the good luck to arrive where I did when I did. In 1979 the battle was well underway to rescue our screens from total colonisation. (Read John Reid’s superb book about Pacific Films for a daunting account of the previous 30 years.) The opportunities were too good not to seize, the old guard so complacent and condescending that disruption was both prerogative and pleasure. Countless ventures later, I am myself faced by the ultimate disrupter in the dreaded, if all too familiar shape of cancer. Though I shan’t be short of ways to fill my days, I am going to miss so richly populated a working life. I leave with few regrets, proud of what NZIFF has been able to pull off.
If I ever felt supervised in my work, it was by NZIFF audiences. There are certain aspects of working in public few would miss, but alarming interactions with the displeased have sometimes proven as energising as the triumphs. I recall being pursed into the Civic office to be cornered by a patron so incredulous that I claimed greatness for film as patently awful as Pialat’s Van Gogh that she needed a closer look at me. On the other hand, one scarcely more reasonable respondent to this year’s audience questionnaire demanded that I live forever. I have been booed on opening night at the Embassy because I bemoaned the banning of Henry: Portrait of a Serial Killer. I felt myself the happiest, funniest, sleep-deprived man alive on another opening night, when I introduced Y tu mamá también, two hours after the Censorship Board of Review denied the injunction against its screening sought by self-appointed (and state sanctioned) upholders of ‘community standards.’
I’ve kicked the furniture when audiences jeered at the little critters in The Night of the Hunter. I’ve basked in reflected glory when premiere audiences, as I felt sure they would, embraced Mr Wrong, Topless Women Talk About Their Lives, Ngati, Kaikohe Demolition, Poi E, The Dark Horse, Scarfies, An Angel at My Table, Waves, Banana in a Nutshell, Yellow is Forbidden, The Ground We Won, Heavenly Creatures, In My Father’s Den and many, many more.
As I introduced Buster Keaton’s The General to a packed Civic on the final night in Auckland this year, I knew this might be my parting appearance in the role. I had been at the APO’s tech rehearsal in the morning, so my final-night exhaustion was buoyed by absolute confidence that we were in for a near-perfect rendition of one of the most breath-taking and funny movies ever made. I left the stage aloft on the good will and excitement of the crowd. The denizens of I Row stood to let me through to the seat I allocated myself dead centre. Job done. What satisfaction. And how brilliantly the film and the orchestra, under the baton of Peter Scholes, surpassed my promises.
In our survey six weeks later, several respondents told us how much they had loved that wonderful night at the Civic. My introduction had been good, the most detailed comment concluded, because it enabled late-comers to be seated before the movie began.
To whoever steps up next, I wish you the best of luck in curbing those damned late-comers. They are not my responsibility any more. Information about applying for the job can be found if you click here .
Happy Holidays – and Long Live NZIFF!
Bill Gosden
Posted by Film Alert 101 at 17:23