At Ngā Taonga Sound & Vision in Wellington New Zealand we came across the sort of Cinematheque activity that Sydney, ten times bigger, lacks. Ngā Taonga Sound & Vision is New Zealand’s Film Archive and its presence in the heart of the city adds much. The premises hold a coffee shop and place to sit and talk, a friendly person on the desk who explains the services on offer, a media access area where an assistant will help retrieve whatever is available, a large number of NZ DVDs that visitors can view and a theatre.

The theatre was being used for a series of screenings devoted to New Zealand’s censorship history and I’m reproducing the program leaflet below. 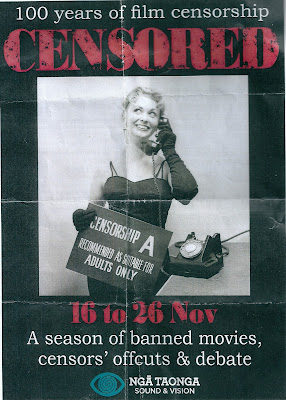 So, Battleship Potemkin, All Quiet on the Western Front, The Wild One and Mad Max plus a panel discussion and a couple of programs devoted to the bits that were removed. Excellent. Outstanding even.

(Those removed bits by the way often stayed removed even when the print was returned to its distributor in Australia, thus causing Australians to see even less of the film than our own censor had dictated. The only copy of Godard’s Vivre Sa Vie circulating in these parts was a notorious victim of New Zealand’s then greater prudery.The panel discussion featured New Zealand’s boss of the Censorship  Office, the Chief Censor, a career public servant who showed himself up as a bit of a pompous ass according to the local scuttlebutt.)

Of the two programs devoted to clips from New Zealand’s past, one was a documentary series which combined lasted for 135 mins. The other only lasted 30 minutes and was supplied by bits held by Archives NZ. One of the staff at  Ngā Taonga Sound & Vision thoughtfully delved into just what was included and emailed through this list for which many thanks for going to the trouble of tracking it down

HERCULES AND THE CAPTIVE WOMEN (Vittorio Cottafavi, Italy, France, 1961) - all the Hercules stuff - including the red lizard monster
DETROIT 9000 trailer (Arthur Marks, USA, 1973) - The Blaxploitation one. Not with Pam Grier after all.
BRUCE LEE SECRET aka STORY OF THE DRAGON & other titles (Hong Kong, 1977). A “Brucesploitation” film with BRUCE LI (not his real name)
MONDO MOD (Peter Perry Jnr, USA, 1967) The masked LSD-user interviewed. The alluring woman dancer that he sees.
WILD GYPSIES trailer (Marc. B. Ray, USA, 1969)  Knife fight, kissing in lake,
BOP GIRL GOES CALYPSO (Howard W. Koch, 1957). coffins in front of the band.

Fascinating stuff and the whole of it is an emblem of what can be done when, with only the most modest of resources, you have enthusiasm.
Posted by Film Alert 101 at 13:53