An uninvolving start sets up farmer Gerard Depardieu grooming his giant cow while son Benoît Poelvoorde goes on the annual drinking tour, that he’s never completed, round the regional wine pavilions at the agricultural show. He alarms Picardie region hostess Marthe Guérin Caufman, whom he failed to pick up the year before, and ends up sleeping in the straw with penned pigs. 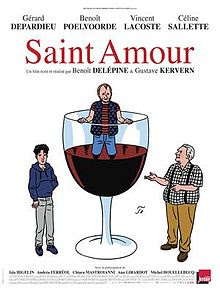 However father and son pile drunk into a taxi driven by stroppy Vincent Lacoste, leaving genial uncle Gustave Kervern behind, and start out on a two thousand Euro cab fare tour of the real French countryside route that is till now only represented by wine bottle labels stuck on their map. This sets up sets up misleading comparison with that agreeable local Paul Hogan - Shane Jacobsen Charley and Boots and a few more.

However it’s not long before the film escapes into the funny-quirky zone where we find Delépine-Kervern (Aaltra, Mammuth) doing their great balancing act between art movie and Grands Boulevards big picture, the way Marco Ferreri used to. This pair are among the best we have now.
The first clue is that Lacoste reproaching Depardieu for his raucous snoring in the hotel room proves unjustified when they go into the next door garage and find a complete family in sleeping bags. Benoît enters the W.C. where his recently widowed dad is making an intimate phone call from one of the stalls and the film’s cell phone becomes one of  its best inventions.
Their travels get to involve Benoît  getting picked up as Mr. Misery by a car full of green wig drunken merry-makers and waking in drag, Lacoste detouring to find old flames one now in a wheel chair and, after a confusing dialogue with her twin Ana Giradot, being confronted by the girl he knew now pregnant. She attacks his taxi with her figure skate. He has the pair confidently charge a hotel breakfast to a random room number and, as they tuck into the lush buffet, the aged red head at the next table (Andréa Ferréol no less, confirming the Ferreri connection) rumbles them.
That works out OK for Gerard with the driver commenting “I thought it was only in
movies that old guys got laid.” Benoît  gets action too with the well built Ovidie, the Real Estate saleslady he’s trying to scam and, when they ask directions from red head Céline Sallette on horseback, she heads them into the tree top cabins park where they have to break the eggs for her omelette before she confides she needs the help of all of them.
Sallette riding past the Tour Eiffel is a great image and the farm work ending is a warmer variation on what we expected from Betrand Blier at his peak.
This gets folded into the film’s tour of France scenics with technical work, including
filming by the duo’s regular cameraman Hugues Poulain, accomplished and the performers at the top of their game. It’s fascinating to watch Depardieu and Poelvoorde meshing, - great stars from different generations and traditions.

Screens again on Saturday 18 June, 6.15 pm, at the Hayden Orpheum Cremorne. The film also has a local distributor, Madman Entertainment
Posted by Film Alert 101 at 17:03