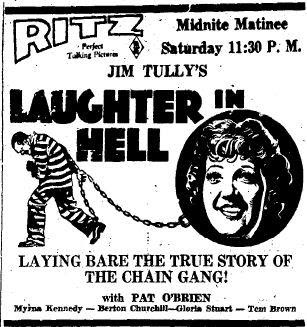 Surprises at every turn. I asked curator Dave Kehr his estimation of the quality to come following the standards set yesterday by William Wyler's A House Divided  (1931) and The Good Fairy  (1935). The latter remained the topic of much chortling over breakfast and I'm grateful to Simon Taaffe for what I think is close to perfect recall of one of one of the many great Preston Sturges lines the film contains. "He took her away to his cave in the mountains." "It was only a game". "The police have another word for it." Guess you had to be there.

In Dave's view the quality was going up with today's offering of two more of Laemmle Jr's productions - Edward L Cahn's Laughter in Hell (USA, 1933) and John Murray Anderson's King of Jazz (USA, 1930). Cahn's film is a very rapid run through of love gone wrong for train driver Barney Slaney. He marries his beloved but she's fickle and is soon seeing an old boyfriend, one of Barney's bitter enemies. Pat O'Brien plays Barney with a featureless delivery of lines and gets life. The brother of the man he killed runs the state chain gang. The sequence in this hell hole, where four blacks are hung is as explosive as any over decades. But the story is all over the shop and just sort of stops. 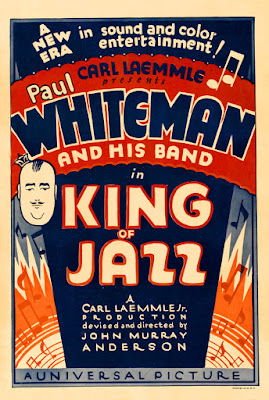 The sense of disappointment was nothing compared to that for King of Jazz. The ovations at the film's new release at MOMA weren't repeated here.  OK lets pay tribute to the art of the restorers who worked to produce a superb re-edition of the original two strip Tecnicolor. Exemplary and beyond - the colours superb, the restoration done with the sort of attention to detail that rarely occurs even when at the high points. Universal, explained Janice Simpson from the company, had explored the world for the best material. But.....

The film was, Dave Kehr informed us in his intro, a major flop on first release. It's not hard to see why. The "devisor and director" revealed no talent at all when compared to his confreres of the day. Beyond putting large numbers of people on screen the film has no energy or vitality to support its attempt at lurid spectacle. It just went on and on and on  - bland sequence after sequence, hardly directed at all, the odd number like the raggedy doll piece of apache dancing showing some sign of life but otherwise weak warbling tenors and bland sopranos wandered by supposedly comic moments. The alleged King of Jazz was the oleaginous Paul Whitman, an unlikely hero if ever there was one. A major disappointment to the overflow house in the very steamy Jolly Cinema. Laemmle Jr went for prestige and glamour but nobody bought it then and I suspect the crowd was not really on his side today