On Blu-ray - David Hare reviews the BDs of the classics Suspicion, Only Angels Have Wings, M (Losey) and The Golden Coach 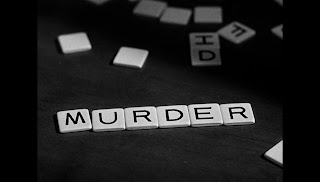 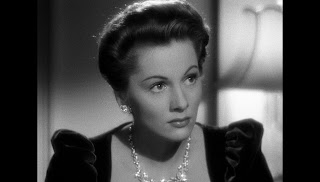 Suspicion (Alfred Hitchcock, USA, 1941)
Hitch at his most playful, still having a ball with elegant and witty montage reinvented from his earlier British career, here in Suspicion with Grant in the first of his four roles for the master. The new Warner Archive Blu-ray is another unconditional knockout, following the label's work on I Confess (1953) and The Wrong Man (1956) earlier this year. It looks like the only remaining Warner Hitchcock properties, Stage Fright (1950) and Mr and Mrs Smith (1941) are now due on Blu sooner rather than later. Meanwhile Suspicion, in this dazzling new 2k mastered image from a fine grain 35mm, itself derived from a nitrate neg delivers the picture in the most sumptuous picture quality I've ever seen. All this is a prompt to examine what at first seems stereotypical role playing and casting, but the leads and the screenplay are given such comprehensively indulgent and thoughtful mise en scene the points of view literally change within shots, and sequences to completely confound either the truth of what's happening to Lina at the hands of Johnnie, or indeed what's going on in her own mind. This is a real subject for re-evalution for me. 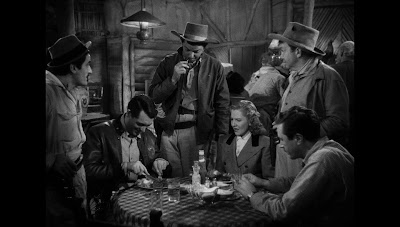 Only Angels Have Wings (Howard Hawks, USA, 1939)
Geoff Carter (Cary Grant) insouciantly plies into a steak while Bonnie Lee (Jean Arthur) looks on in horror at what she perceives to be his cold bloodedness, while the group gathered around all respond in their own individual ways to the death of Joe in Hawks' sublime Only Angels Have Wings from that greatest year of movie years, 1939.
The new Criterion Blu-ray from Sony's absolutely stunning 4K remaster (from nitrate elements) is one of the first Blu-rays I've double dipped on. This first came out in the Blu format on a limited release TCM deal over a year ago on a single layer bare bones release. I thought that was pretty wonderful, and was amazed when the new 4K DCP failed to make the cut for last year's NZIFF. I understand it's one of Bill Gosden's favorite movies. But this new Criterion sports nearly double the bitrate and file size (at 35 gigs for the movie) and a knock your socks off uncompressed LPCM audio which all makes you want to go out and buy a 12 grand 4K projector tomorrow just for this.

The movie is beyond criticism as far as I'm concerned and takes top place with Rio Bravo (1959) in Hawks' canon. Even the bad blood between Miss Arthur and Hawks with her tantrum throwing at his direction and his feigned indifference to her on-set self-aggrandising makes its own way into the texture of the movie to shade her initially annoying small town petite bourgeoise prat into a performance she almost certainly was unaware of giving and certainly incapable of creating without Hawks’ methods. Only a very great director like Hawks can risk "challenging" the studio-perfect template of Columbia's then leading lady and shake it up into a far more complex human being. Capra's 30s New Deal deification of her, which I find increasingly tiresome as I get older, is radically challenged here, and was again by Wilder in 1948 in the wildly underrated A Foreign Affair in which the director allows Dietrich to quite visibly shake her down and humiliate her before Miss Arthur and her seemingly worthless lothario John Lund find a kind of Wilder-ian flip "redemption" at the end.

Meanwhile we have this total masterpiece complete with another Hawksian male love story, played by Thomas Mitchell (who surely played more subdued gay parts than any other straight actor in Hollywood), the regular camaraderie of the business, which lights like wildfire throughout the narrative and none other than Rita Hayworth's first major role, a part in which the magnificent young beauty steals every shot she shares with Miss Arthur, or anyone else, one suspects with the gleeful complicity of Hawks. 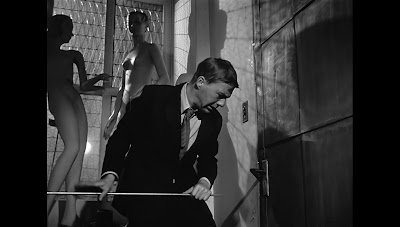 M (Joseph Losey, USA, 1951)
David Wayne as the child "killer" in Losey's magnificent remake of Lang's 1930 M from 1951. The screen cap shows the killer trying to claw his way out of the iconographic Los Angeles Bradbury Building where the criminal mob closes in on him with their operatically violent justice. This fantastically good new Blu-ray from Sidonis, France comes right on the heels of an excellent French DVD release from late last year on the Films Sans Frontieres label. That DVD looked very good indeed, and while I can find no further documentation anywhere on the new Blu to confirm any new source or further restoration work undertaken, I would simply say the Blu-ray image which is literally flawless is from the same pristine vault quality 35mm triacetate print and displays top end Warner or Criterion levels of stability, gray scale, black level and sharpness with perfectly rendered film grain. Not quite so pristine is the audio which while perfectly clear and in lossless DTS MA sounds at times like it's having moments of PAL speedup, especially noticeable when Raymond Burr speaks his very few lines in a small part. Burr's baritone here sound like the classic PAL semitone rise squeakies. I can't fathom this as the film's running time is the original 88 minutes and visibly doesn't appear to suffer any speedup. The earlier PALDVD runs at 25fps speedup time of 84 minutes which is both visible and audible so perhaps I am hallucinating this extremely minor detail in the new BD.

What I'm not hallucinating is the extraordinary power with which Losey drops sequences with effectively identical montages and camera angles to Lang's into his own film, which then have the effect of creating a kind of meta-cinematic Brechtian dialectic between Lang's film with Losey's own mise en scene, itself rigorously naturalistic yet hysterical and dynamic. Where Lang's film is entirely shot on soundstage Losey's is almost entirely shot in natural light (by Ernest Laszlo) on location, a blessing for the legions of Los Angelophiles among us, with its classic Bunker Hill and Bradbury Building locations. Again, given this is SIdonis I can switch off the French subs on the Oppo but this may not be the case for all players. The two major extras including Bertrand Tavernier's 30 minutes plus to camera piece are sadly unsubbed. 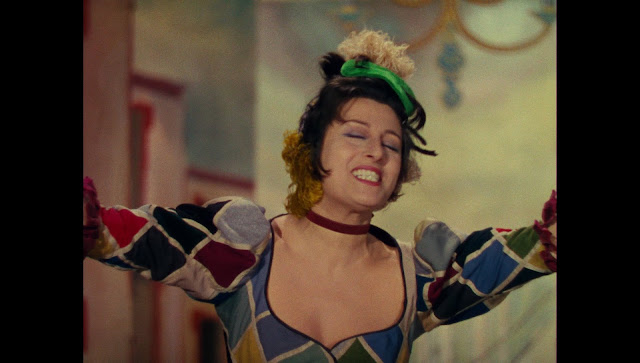 
The life force, Anna Magnani is Columbine and Camilla in the Theatre and in Life, and inextricably both in Renoir's hymn to performance and theatre, The Golden Coach from 1952. I've always found the comparison of this and Cukor's Heller in Pink Tights from 1960 irresistible but never had the chance to program them together until now in my own cinematic sanctum.

The screen is from an eye wateringly beautiful new-ish restoration to Blu-ray on the French TFI label, from CNC and PostHouse Digimage re composited from original 3 strip negs, then newly color timed and mastered. I am guessing, given the paucity of information on the disc the resto was performed sometime around 2012. This is a simply perfect rendition of one of the very greatest color films ever made, (photographed by Renoir-bro Claude) and one of the last 3 strip neg Tech productions and it's a revolutionary step up from Criterion's disastrous inclusion of a fatally compromised source from Gaumont in its three DVD "Stage and Spectacle" boxset from ten years or so ago. On my player the French subs on the English language version are removable, and the disc includes the rarely seen French audio version which was dubbed under other hands than Renoir's after the very first release in a third, and now totally unavailable Italian dub which premiered the picture in 1952. Renoir himself always nominated the English version as his preferred and he was right. Almost all the parts are spoken by the players themselves, with quite a bit of wild track running as principal audio, excepting the bullfighter and the BIshop who were dubbed in this and in the French version. Both versions are completely identical with the same takes, setups etc, and only a four second difference in running time but all the French dialogue has been post synched, again by most if not all the actors themselves, including Magnani whose French is as capable as her excellent English.

This is a movie I used to borrow in a lovely IB 16mm print from the then French Embassy library in Sydney, perhaps like many others here, and play endlessly onto a blank wall for friends and myself, until we had nearly worn out the drum on my old post WW2 Bell and Howell. It's some sort of tribute to encroaching age and the thought of life fading further and further into time that the very timelessness of this masterpiece can be brought back so vividly in such an ideal, premium quality format, in the latter part of one's life, and for a younger audience of cinephiles. Yet, when you watch post war Renoir the concepts of time, ageing and the passing of life itself seem so completely abstract in the face of his boundless reaffirmation of hope and the value of all life. I hope I live forever with Magnani's/Camilla's mantra from the opening scene ringing in my ears ... "is all this worth it for two hours every night?" Yes, it is
Posted by Film Alert 101 at 05:22