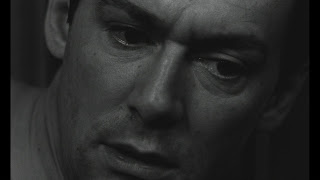 Le Feu Follet (Louis Malle, France, 1963, 110 minutes) Maurice Ronet (left) at the top of Gaumont's new-ish Blu Ray of Le Feu Follet, Malle's best film (in what to me is a career filled with bourgeois smugness.) The transfer is English subbed for the feature and region free. While the new image is highly detailed and well resolved for grain and stability Gaumont has once again failed to to master to true black level or gamma for the image so a number of late scenes with what should be a large contrast range to reflect Ghislain Cloquet's photography are now black crushed. Not nearly as bad as Gaumont's dreadfully mastered new L'Ascenseur pour L'Echafaud from what is supposed to be a fine new 4K master. Buy with caution. And time for Gaumont to find another post house to do more reliable quality mastering work than bloody Lab Eclair if they are indeed the problem (as they have been in the past.) One wishes it wasn't Gaumont doing their own product for Blu Ray. The results are constantly unpredictable from title to title. 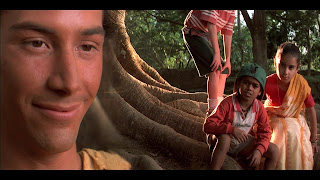 Little Buddha (Bernardo Bertolucci, France/Great Britain, 1993, 140 minutes)This is an advance screencap from the latest and the least anticipated French Blu Ray release I've bought this year so far (among many.) Berto's Little Buddha is such a clandestinely beloved film of mine I am loath to let the secret out of the bag but there you go. Having been the sad owner of no less than two DVD versions of this, both of atrocious video quality - one from Miramax which is indescribably bad, and Madman ex TFI both also atrocious which both come from an ORT source of 123 minutes - the new TFI Blu promises a far superior image without the squeezed image pinch of their DVD, and it is given a 127 minute running time which suggests the restoration of some footage BB decided to cut before release, from around Chris Isaak character and the suicide subplot of his work colleague.

This is finally a transfer worthy of the film. Released in fact a couple of years ago but slipped past my radar. And for what I believe is the first time publicly the film runs the original Berto cut of 140m. 37s which is 17 minutes longer than any and all previous theatrical cuts or DVD which all ran 123m 37s (in true 24fps time). TFI did release a simultaneous DVD only of this long cut transfer in France if you can be bothered 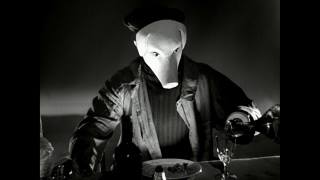 The totally banal English title for this was Carnival of Sinners which goes some way to suggesting the incomparable taste and poetry of French culture and language. But we already knew that. Who else could rename Bunuel's sublime 1953 potboiler Susana to the infinitely more Sadean Susana , La Perverse. 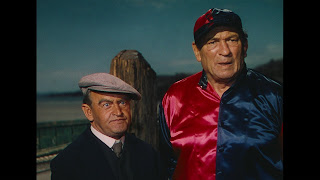 The Quiet Man (John Ford, USA, 1952, 129 minutes)  A quick thumbs up on MoC's new Blu of The Quiet Man. Another double dip here is required for several of us, not only has MoC included a 17 minute video essay by Tag Gallagher which is essential to life (and Ford lovers) but I have it on authority the 1080p master made for and used by the Olive disc which IMO had some issues has been remastered by David McKenzie for MOC and the improvement in color depth, grain management, tonal gradations, black level and balance are palpable. The image now appears to have a supple and refined 50s Technicolor glow. The older image was in comparison relatively coarse and pushed. There goes the Xmas turkey. NO pics yet, I dont have the disc, but Gary's caps say it all.Two new arrivals - easy guessing what this is! David Mackenzie's exemplary mastering from the original 4k for MoC just takes this new transfer to a new level of fine grained, beautifully graded 3 strip Technicolor loveliness. 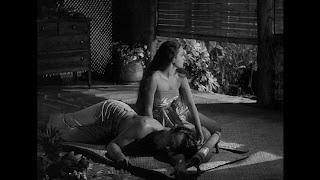 The Hurricane (John Ford, USA, 1937, 110 minutes) Dorothy Lamour and Jon Hall after extremely un-Fordian nookie from the new Kino Lorber Blu of Ford's wacky exotica,The Hurricane. I have no idea where to locate this picture in Ford's universe but it is extremely enjoyable. The new disc is very good, if not quite at stellar WHV or Criterion levels, typically K-L with quality scanning and transfer work from a reasonable vault or dupe 35mm element. Next Ford for Blu Ray Seven Women please! 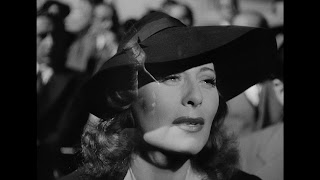 Passage to Marseille (Michael Curtiz, USA, 1944, 109 minutes) Gorgeous lap dissolve (by Don Siegel in the montage department?) from Michele Morgan in the new Warner Blu of Passage to Marseille. The picture seems to operate in a noticeably different register to Casablanca which it superficially resembles, as though the war and the vile Vichy government really were there to stay, rather than the Kane-esque playfulness that fills every frame of the earlier picture. Maybe it's Morgan this time (not that Bergman is a slouch in the dramatics department) but Michele carries such a lot of weight, she made this straight after Gremillon's crazy and sad Remorques after all. The transfer is yet another right up there-blow'em out of the water 35mbps bitrate stunners. The same stratospheric HD quality alas has not been carried over to the extras, ported from the old DVD which includes Gjon Mili's fabulous Prez short, Jammin' the Blues, which, like the other bonus items is a crappy 480p standard def and even crappier lossy audio. It's like they have two departments handling their Classic deep cataologue Blus, the A team and the bloody Z team. 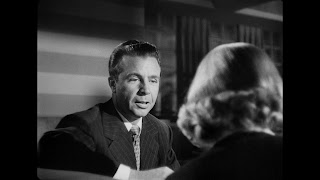 Pitfall (Andre de Toth, USA, 1948, 86 minutes) New Kino Lorber Blu Ray of Andre de Toth's masterful Pitfall. De Toth was one of several major directors who clearly evaded Sarris' view back when the canon were being composed. Along with Leisen he's the most underrated great American director of the twentieth century. This picture, and Crimewave, and Ramrod and Springfield Rifle just for starters are the overwhelming evidence. Pitfall is one of the two greatest "Domestic" Noirs, along with Ophuls' The Reckless Moment. The new transfer is a nice clean 1080p scan without embellishment from a restored UCLA print and the disc is further enhanced by a commentary from Eddie Muller. As you might be able to see K-L has scanned the image to the edges of the 35mm aperture with the curly corners usually in view. This is a touch I always like, although some purists hate it.