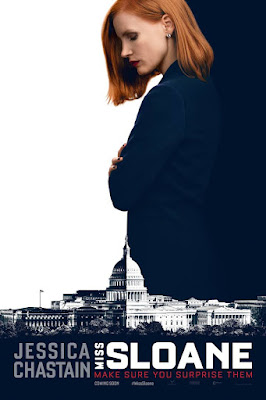 There were two punters in attendance at the 10.00 am session of John Madden’s Miss Sloane (USA, 2016, script by Jonathan Perera) in the smallest cinema at the Randwick Ritz. Just moi and another. Fortunately the crowds of tutu-dressed little girls with parents or grandparents in tow for Ballerina had the box office ticking over and the guy in front of me bought a ticket to Logan. Enough with the rainy Sunday morning atmospherics at the Randwick Spot.

Miss Sloane is devoted, indeed is somewhat lengthy in analysing, a subject that clearly millions of people have absolutely no curiosity about.  Punters are not rushing off to see Jessica Chastain in the way they might have once rushed to see Julia Roberts, anther delectable object of desire who had the great fortune to have a giant hit early in her career, play such a part. Roberts and Chastain seem to me to have similar gorgeous facial features, but that might just be me.

In Miss Sloane Chastain plays a ‘lobbyist’, a small and largely unknown sub-section of the political class which exists anywhere in the world where it’s possible to exercise influence over the way elected politicians use their vote. I don’t imagine there are many lobbyists in China or Russia but in the US there are thousands of them. If you want to know what they do, there are a number of highly articulate speeches and a number of practical demonstrations of their work in this new film. I suspect writer Perera  has a filing cabinet full of clippings to go along with his acknowledged close reading  close reading of the criminal Jack Abramoff's 'Capitol Punishment".

In fact, notwithstanding the paltry attendance that the film drew at Randwick, and I assume elsewhere, in its opening week, Miss Sloane is likely going to have a long, if minor, life as a primer for discussion for political science, ‘communications’ and other subjects taught at tertiary level. It will make life easier for those many thousands of academics who are paid to teach these things but whose knowledge of the nuts and bolts and just how down and dirty lobbying can be is probably limited to information acquired from newspapers, novels, TV shows and the odd memoir. Not that many lobbyists have written their memoirs. Anybody with any level of success in the trade will not need to make that effort for the modest remuneration. The revelations are better revealed over long lunches than on the page.


For a long time now, just every so often a film comes along which attempts to peer into the darker sides of American politics. You can go back a long way to studies of backroom politics filmed long before lobbyists got to be what they are. A little while ago I sent some words about John Farrow’s Alias Nick Beal to Adrian Martin for a piece he was doing. Here are a couple of the salient paragraphs. Alias Nick Beal is set in the backrooms of American politics. Principled public prosecutor Joseph Foster (Thomas Mitchell) is being tempted to enter politics but is determined not to make a deal with the sleaze element of his party. They are represented by Franky Faulkner (Fred Clark) whom he tosses out of his office. Then, from out of the fog bound locale of the China Coast Cafe, there emerges Nick Beal (Ray Milland). He moves with effortless grace, appearing suddenly, disappearing easily, manipulating, putting temptation in Foster’s path. It brings down his marriage and his principled reputation and he is only saved by late divine intervention when a character guesses that Beal has an aversion to the Bible.

Beal you see is a Devil. Lucifer in a business suit and a sleek brilliantined hair cut. Not The  Devil mind, for his field of activity is far too limited to be the sole occupant of that chair, but A Devil and his malignant influence spreads like an evil spirit of noir out of his wharf dive right into the halls the power. Mesmerising stuff and directed by Farrow with an economy that one might wish to see return today. One especially brilliant moment is the two minute long shot wherein Foster and his local priest discuss what he needs to do to get Beal off his back. The movement within the frame, the sleek little camera dollies into close-up and out are breathtaking.

Digging down the subjects, there are films about lobbyists, or at least where they get a mention. Herbert Ross’s Primary Colours, cartoonish as it is, is one example, notable especially for a scene where two staffers are out having dinner and they spot another staffer being entertained “By a Lobbyist!!!!” OMG as they say.

In recent years, there was Thank You for Smoking an adaptation of Christopher Buckley’s hilarious novel about lobbyists who represent the MOD squad, guns cigarettes and alcohol and the tricks they get up to. The book is funnier, and smarter, than the film.

Then there is Frost/Nixon, taken from a Peter Morgan script and directed by Ron Howard, a film which almost incidentally has a constant background whereby Nixon’s minders, especially Jack Brennan (Kevin Bacon) are immensely sensitive to their boss’s condition and the need to preserve what little there is of his legacy. I once wrote a long piece about the film replete with footnotes, quotes from Machiavelli, and from Preston Sturges and other show-off personal revelations.

Minders and lobbyists often seamlessly interchange though the big money is in lobbying if you can find the right spot, most notably an industry with loads of money and significant interests to protect. Those interests rarely coincide with the public interest. Lobbyists build up relationships with minders. These people also have interests to protect, beyond their own that is. Most notably, keeping their boss in situ is Priority One.

(A variation on all this nefarious activity most recently occurred in Michael Clayton. George Clooney plays a fixer for a law firm, someone whose job it is to clean up troublesome matters so as to ensure that the law firm's pristine reputation is preserved. That film was written and directed by Tony Gilroy, author of some of the Jason Bourne movies, a contributor to House of Cards and a practised hand with politics and conspiracy theories.)

Finally, a favourite example of a movie wherein a minder is always at work is way off the beaten track. It’s in Budd Boetticher’s Buchanan Rides Alone (1958). In the film Randolph Scott as Buchanan comes across a place called Agrytown. The power in the place rests with Simon Agry, fat, fearful, brutal towards his enemies and owning everything in the town. However Simon does not make a decision without consulting with or taking advice from Abe Carbo (Craig Stevens), an eminence grise lurking in the background whose only function is to give advice to the frequently befuddled Simon. Abe always smooths things out and shows a way forward. This contribution to the Ranown cycle was written by Charles Lang, not Burt Kennedy, and with its comic tone, it sits slightly to one side in this set of minor masterpieces.

Search out the wonderful Budd Boetticher box set but in the meantime, for those in the grip of how politics and money collide in western democracies, see Miss Sloane. It may be operating on steroids in showing just how devious political operatives can be but the snaky narrative and the set ups are fascinating.
Posted by Film Alert 101 at 16:33