From the point at which serious film analysis took off (in the late 1960s here in Australia), the Hollywood musical has been, like the Western, Film Noir, Science-fiction, Horror and Comedy, a heavily celebrated genre, producing countless epigraphs, tomes, theses and coffee table books.

Common wisdom has it that historically the most important musicals have centred on the dance, from Busby Berkeley's imaginative kaleidoscopic erotic fantasies; through the magic of the "peerless pair" (Astaire and Rogers) whose chemistry produced a near-alchemical impact on the progression and maturation of the form both in stylistic and narrative/thematic aspects; and finally culminating in its apotheosis at MGM at the Freed unit which operated relatively unimpeded against the usual incursions of studio bosses and bureaucrats and allowed the burgeoning and development of outsize talents like Vincente Minnelli, Stanley Donen,  George Sidney, Comden and Green, Roger Edens, Robert Alton, Charles Walters, Conrad Salinger (and a host of others) in a way unique to film history in mainstream Hollywood. Hugh Fordin wrote perceptively of the conditions that brought this about and nurtured it through two decades or so. More recently, the "That's Entertainment" series of films popularized the phenomenon to the general public.

Fox musicals achieved neither the critical acclaim nor the status of the Freed unit at MGM but they always mustered a strong public following: directors like Walter Lang, Lucky Humberstone and Irving Cummings were no match for the roster of talent cited above but at their best they made lively entertainments in bold (some might say garish) technicolor hues. There were always strong elements of terpsichore but the studio specialized in songbirds and swing stars like Harry James, Glenn Miller and Benny Goodman. The male leads were generally the weakest links in the chain (it was hard to get excited about George Montgomery or Cesar Romero, although John Payne fared a little better and Dick Haymes was a very posh crooner, the classiest act this side of Crosby and Sinatra). The Foxy women like Betty Grable and June Haver were another story, frequently carrying their vehicles not so much on outstanding talent as on their sheer energy, high spirits and ability to convince their public that they were real troupers in tough times. 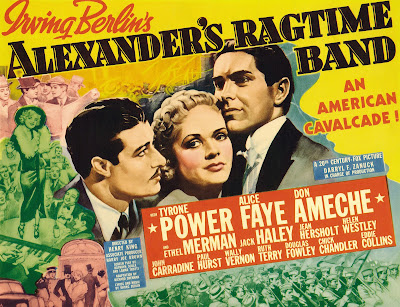 Alice Faye, on the other hand, stood out from her peers. The soulful blonde with her melting blue eyes, mellifluous contralto voice and genuine acting talent had been around from the mid-30s, debuting in George White's Scandals (George White, Harry Lachman & James Tinling, 1935), then serving time in Shirley Temple vehicles until she finally impacted as the second female lead in On the Avenue (Roy Del Ruth, 1937), memorably presenting some Irving Berlin standards. Her warmth and charm quickly made her Fox's best musical asset, opposite Tyrone Power in three strong films, In Old Chicago (Henry King, 1938), Alexander's Ragtime Band (Henry King, 1938) and as the Fanny Price figure in Rose of Washington Square (Gregory Ratoff, 1939). She really hit her stride from the early to mid-40s, typically in Tin Pan Alley (Walter Lang, 1940) and Hello Frisco Hello (H. Bruce Humberstone, 1943), the latter showcasing her unforgettably moving Academy-award winning song “You'll Never Know”. She atte 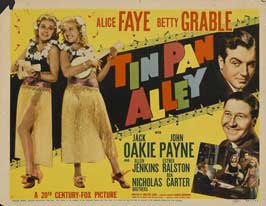 mpted to extend her range into straight dramatic acting in Preminger's fine noir, Fallen Angel (1945), but in spite of acquitting herself very creditably, the prominence of her role was reduced in the final cut and she retired gracefully. Apart from her "comeback" in Jose Ferrer's execrable remake of State Fair (1962), she was content to bring up her family and play second fiddle to her husband, band leader and occasional actor Phil Harris.

Far from being nearly forgotten, Faye is the subject of at least one of the "Films of..." series; an excellent documentary called "Alice Faye:The Star Next Door" played frequently on TCM in the 90s which turned up as a welcome extra on Fox's DVD release of Henry King's Alexander's Ragtime Band; and she figures prominently in all the standard histories of the Hollywood musical, including Ted Sennett's indispensable coffee table book.  Like Jeanette MacDonald, Deanna Durbin, Irene Dunne and other important musical stars Faye has been under represented on DVD because sadly the Hollywood Musical, like the Western, is a little out of fashion. Sad.