I was never much for her skills as a an actress, or her essence (Tanaka Kinuyo does it for me in skills and range, the mysterious Mizukubo Sumiko for essence). But how she came to be the emblem of Japanese post-war women remains essential in making sense of that time in Japanese culture and its movies - and their balance-finding between public ambition and domestic duty, their moments of insistance and withdraw (... and I still see it just a bit in many Japanese women I know who work successfully in their film industry now). That's the mystique that animator Kon Satoshi was trying to explore in his partially biographical Millennium Actress (Japan, 2001). 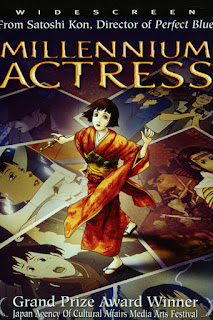 And speaking of mystique, of course she made up a part of what Ozu meant for western fans, beyond the director's technical skills.
Posted by Film Alert 101 at 04:07