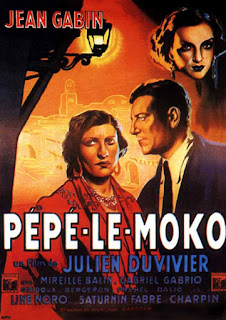 “Come with me to the Casbah” – make that “Come viz me to ze Casbaaah” - is one of those lines enshrined in cine-legend, not just in that it provided source material for a thousand Charles Boyer imitators, but because, like so many so-called classic lines, it was never actually said.  The supposed source film was , a 1938 Hollywood thriller which must surely go down as one of the best ever  treatments of a French original.  Yet its excellence is achieved by proxy, in that the audiences who swooned over Charles wouldn’t have known a subtitle from a subway, and would never have heard of the French original, its director (though they soon would as he went to Hollywood) or its stars.   is a very fine film, but it’s a romantic film in every way.  The original was romantic, but it was fatalistic, too.  One of the reasons why it is now seen as a pivotal film in the development of poetic realism, but also why Graham Greene famously said of it, “I cannot remember a film which has succeeded so admirably in raising the thriller to a poetic level.”
Pépé le Moko is the name given to a legendary criminal housed in before the war.  He has become celebrated not just in the eyes of the underworld, but also in the eyes of the helpless police.  Why can’t you catch him, a Parisian detective bemoans, and he is informed of the nature of the Casbah, “a vast staircase where terraces descend stepwise to the sea…a population of an area meant for .”  They try to go in after him, but are left looking shambolic when he escapes with little trouble.  One detective even admires him, but waits for the time to strike, and sees that opportunity when Pépé takes an interest in a rich tourist with a taste in 20,000 franc jewellery.


In all honesty there are aspects of Algiers that are better than the original, in particular some of the support cast; one longs for Alan Hale over Fabre as Grandpa the fence, and Joe Calleia was superb as the inspector where Gridoux just makes one long for Charles Vanel.  In virtually every other aspect, though, and certainly in terms of iconography, Duvivier’s film is not only vastly superior, but it may be his greatest work (for me, only his unjustly overlooked 1946 thriller Panique comes close).  It’s a film which captures like no other the taglined teeming anthill of the Casbah, a truly immortal district in old whose very character is so perfectly evoked in the introductory montage.  Yet Duvivier is at pains to point out that there’s nothing romantic about it, the Casbah is very much Pépé’s own private prison, from which he can never hope to leave.  His detective nemesis knows this and is content to wait for the right moment, like the Sheriff hoping to lure Robin out of the impenetrable mazes of Sherwood.  He is helped immeasurably by the camera of one of that greatest of forgotten cameramen, Jules Kruger, whose work truly is breathtaking to behold, from the dewy-eyed close-ups of the protagonists to the crisp panoramas of the port to which Pépé wakes every morning.

Amongst the cast, meanwhile, Charpin’s informant is indelible (“I’m an informant, not a hypocrite”), and there’s a rare appearance by the legendary Fréhel and another stylish cameo from Gaston Modot, complete with toy, to savour.  At its heart, though, is the truly immortal Gabin, who takes oral sex to new levels in the memorable sequence where he and Balin rapturously recall their favourite Parisian landmarks, while the portside railings finale was paid homage by Carol Reed in Odd Man Out.  Just as the Casbah stands as a city apart, so does Duvivier’s film stand as a film apart in the history of French popular culture.
Posted by Film Alert 101 at 05:02