This coming weekend in India is Dilwale* a major holiday and special date in the Hindi film calendar. This holiday always sees a big Hindi film released. This year there are two prospective blockbusters to be seen both of which will be released in Australia this Friday. 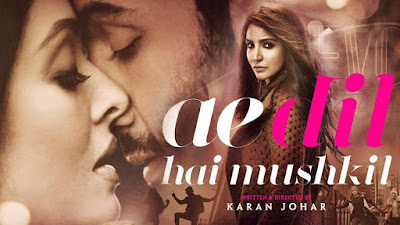 The first of the two films is Ae Dil Hai Mushkil (English: This Heart is Complicated or Difficulties of the Heart. The film stars Ranbir Kapoor, Anushka Sharma and Aishwarya Rai. It also stars Farwad Khan, a Pakistani actor who has appeared in a number of recent Hindi films. Although this is a much anticipated film by Karan Johar, the director of the blockbuster success My Name is Khan, this new film has been under a cloud of controversy. It has nothing to do with the content of the film, but a Pakistani actor is featured. cinema and the arts have been targeted because of political tensions between the two countries. This came to a head after an attack in Jammu & Kashmir when a number of Indian soldiers and civilians lost their lives. All Pakistani artists, actors and composers were asked to leave India. More details here. Or very briefly below**

On 8 October 2016, Indian political party, Maharashtra Navnirman Sena (MNS), proclaimed that they would not allow the release of the film, following nationwide protests surrounding the terrorist attack in Jammu and Kashmir on 18 September 2016 and the decision by Cinema Owners Exhibitors Association of India preventing the release of films with Pakistani actors in four states - Maharashtra, Gujarat, Karnataka, and Goa. Citing the casting of Pakistani actor, Fawad Khan, in the film, the MNS warned theater owners around the country not to screen the film, threatening them with vandalism. Announcing that security will be tightened at theaters along with sufficient police protection, Maharashtra chief minister, Devendra Fadnavis, commented on the issue, saying, "Anyone found taking the law into their hands will be dealt with firmly." He also advised that 12 MNS members had been sent to judicial custody after they barged into a Mumbai theater and held a protest on 19 October 2016.

Commenting on the ruckus behind his film's release, director Karan Johar said that the circumstances in which the film was made in 2015 were completely different. "Going forward, I would like to say that of course, I will not engage with talent from the neighbouring country, given the circumstance. But with that same energy, I beseech you to know one thing - that over 300 people in my Indian crew have put their blood, sweat, and tears into making my film, Ae Dil Hai Mushkil. I don't think it's fair for them to face any kind of turbulence on account of other fellow Indians," he further added in a video statement. He was heavily criticized by news and social media for buckling under pressure. However, people from the film fraternity like Mukesh Bhatt and Shyam Benegal supported Johar and his film, and requested the people to consider the film and its release without giving paying  attention to the actors' nationalities.

The film along with another film featuring a Pakistani actress, Raees, due for release in January has now been cleared for release (hopefully without incident). It has been agreed that the Pakistani performers were engaged before the terrorist incident. It has however been alleged that Karan Johar was forced to recut portions of the film, shortening Farwad Khan's role.

Like all Karan Johar's films ADHM promises to be an emotional film, the story based around friendship that becomes a one sided or unrequited love. The two stars are both exceptional performers, Anushka Sharma & Ranbir Kapoor and were recently seen together in Anurag Kashap's misunderstood Bombay Velvet, which also starred director Johar in his first substantial acting role. 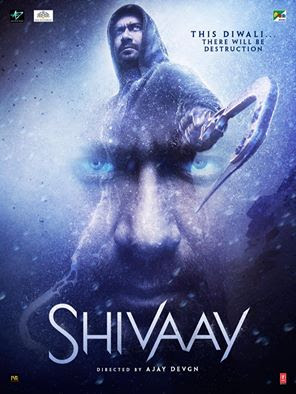 The 2nd Dilwale film is Shivaay. This thriller is written directed, produced by and stars Ajay Devgan.  Although he has produced a number of films, this is only Devgan's 2nd outing as a director, so he has much riding on the film, especially as it is releasing during the Dilwale holiday.

Shivaay is a Himalayan mountaineer forced into an extraordinary situation to protect his family. Devgan has described the film as an emotional thriller
The film was shot in Mussoorie, Bulgaria and Hyderabad.

Shivaay's soundtrack has a guest vocal appearance by the British Pop-rock band The Vamps.


*Diwali (or Deepavali in Sanskrit) literally means "a row of lights". This five day festival, the biggest in India, honours the victory of good over evil and brightness over darkness. It celebrates Lord Rama and his wife Sita returning to their kingdom of Ayodhya, following Rama and monkey god Hanuman's defeat the demon King Ravana and rescue of Sita from his evil clutches (on Dussehra).

When is Diwali?
In October or November, depending on the cycle of the moon. In 2016, Diwali starts with Dhanteras on October 28. It concludes on November 1. The main festivities take place on the third day (this year, on October 30).

***The 2016 Uri attack was an attack by four heavily armed terrorists on 18 September 2016, near the town of Uri in the Indian-administered state of Jammu and Kashmir. It was reported as "the deadliest attack on security forces in Kashmir in two decades".No group has claimed responsibility for the attack, though the militant group Jaish-e-Mohammed is suspected of being involved in the planning and execution of the attack. At the time of the attack, the Kashmir Valley region was at the centre of unrest, during which 85 civilians were killed and thousands injured in clashes with security forces.