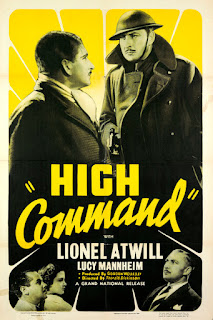 The High Command, (Thorold Dickinson, Fanfare –Wellesley Films, UK, 1937) is my first detailed study of this English director. He enjoys very high reputation despite a limited filmography . I believe I ignored him for the wrong reasons, principally because a subsequent film, Gaslight (George Cukor, USA, 1940) was suppressed in favour of a Hollywood remake which I have never liked. I think my subconscious reasoning was that if the remake were unsatisfactory, and the original suppressed for practically my entire lifetime, the original must have been poor. As it transpires both bad reasoning and bad conclusion.

I have previously expressed the view that "interest" in the particular subject matter or setting of the film can make a radical difference to one's appreciation. Some subjects simply don't hit the right spot. Expanding on that, I think there are circumstances in the present which can imbue a past film with a different emphasis because we in the present have a knowledge and experience denied those who made films in the past. I shall turn to this later.

The film itself is Dickinson's first feature and on any criteria it is a very worthy effort. The male star Lionel Atwill, although English, was at that time a principal actor in Hollywood who must have had some good reason for returning to the UK to appear in a film by a first-time director. His trust was justified. Atwill plays Gen Sir John Sangye VC DSO, who at the film' s beginning kills a fellow officer in Ireland during the troubles. Sangye has been having a liaison with the fellow officer's wife and she has born Sangye's daughter. The circumstances of the killing are probably justifiable. The military medical officer who conducts the autopsy recognises that the revolver used is an unusual type and indeed is the revolver carried by Sangye.

Some years later and now a major general, Sangye is on post as the military commander of a British colony in West Africa. The credits indicate that it is at least similar to Gold Coast or Nigeria. There is some excellent second unit location work showing the panoply of Empire: native troops in their unusual uniforms including the fez are seen marching on parade with a very well orchestrated military band in the background. Of course none of the second unit work is fully integrated into the storyline because no principals appear. They were still in England. Yet this material is very judiciously used and certainly creates an image which would be immediately recognisable to the market at home.

The medical officer formerly in Ireland is also transferred to the colony and begins to close in on Sangye. Sangye is also the enemy of Cloan (well portrayed by Steven Geray before his subsequent departure to Hollywood), a wealthy businessman whose wife is conspicuously unfaithful, including as it transpires with the medical officer. Although wealthy and commanding in business, Cloan is quite hapless in private life. James Mason who looks extraordinarily young and indeed callow is an impecunious junior captain who stands to benefit from the death of the medical officer who is his cousin. Without going into more of the details, the medical officer is murdered and pretty much every speaking part actor has a motive and opportunity. The film may therefore have developed into what we can subsequently recognise as a "cosy", a neat detective-thriller story set in effectively a "closed room" with false clues regularly dropped until the last moment. It does not do this. Instead information in terms of the conflict between the various characters exposes them all to the possibility of guilt. While one may take pleasure from guessing the guilty party, nothing becomes clear until the very end. I may be an innocent in this regard but I found this very convincing.

Interiors are studio shots in a sort of fictive colonial setting: a sort of Beau Geste fort of protruding wooden beams and whitewashed roughcast walls, something that would do equal duty for India, South Africa and probably colonial Spanish America. The interiors are also largely pale colours and the direction includes very effective photography, particularly of shadow lines against the white walls. For its time and place, I considered this film well-nigh flawless. I had absolutely no difficulty "getting into sync" with the development and acting style.

Turning now to the issue of a better perspective on the past that we may now possess, this relates to the issue of "the Empire". We now know that the British Empire in the setting of 1936 was already extremely shaky and the pageantry of Empire: the troops, the flag, the civil and military servants of Empire far from home were really pretty shabby. But to a viewer in 1938, the fact of a murder within the ruling class/caste, where enormous pains were made to maintain a rigid area of separation and superiority from the "natives" must have made this film much more unsettling. For our part, seeing a court-martial, in which military officers wear the full fig of jodhpurs and high boots, Sam Browne belts with swords and quite enormous tropical hats makes it very easy to see this as purely comic, even if unintentional. To me however it gave an extra resonance. The Empire has passed so far from recollection and from fact, that the film does not appear to be set in 1936, rather it could be as long ago as the time of the Pharaohs!

As an example of this different perception, there is one scene which I found superbly illustrative. The general has required a military band to stay at the club (everyone knows that the British in the colonies always congregated to "the club" at night) after 6 PM and this is objected to by Cloan as chairman of the club. This is an early indication of their enmity. The general replies that he did so in order for the band to play "The King". When the band outside the main drawing room of the club does play the anthem, everyone naturally stands to attention. A sudden gust of wind causes one of the open windows to bang repeatedly and a young native servant moves to close it. The general waves him back into position because, naturally, everyone must stand at attention. I cannot tell whether this was done deliberately to so convey the idea of "duty" or whether it was just happenstance. However it illustrates the nature of the film so well that I think it must be emblematic of the great capacity and subtlety of the director.

At the same time as I was watching this film, I also saw a post World War II film, They Were Not Divided (Terence Young, UK, 1950) which I think also has aspects in which our current understanding can amplify the understanding as perceived by a viewer at first release.
Posted by Film Alert 101 at 03:45